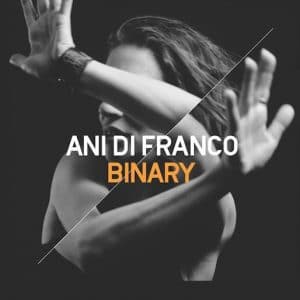 It’s easy to forget how groundbreaking Ani DiFranco is – especially in these days when self-releasing your own record is a relatively simple process. Back in the late ’80s though, record companies ruled the roost, so the sight of the then teenager from Buffalo, New York casually setting up her own Righteous Babe label was somewhat revolutionary.

DiFranco was also a stridently political voice long before it was fashionable, singing about issues such as gender identity, sexuality and feminism pretty much throughout the ’90s. Those lyrical concerns still raise their head on Binary, her 20th album, although this record isn’t the polemic against Trump’s America that you may be expecting (most of these songs having been written and recorded before November’s election).

What has changed over the years though is DiFranco’s musical style – she’s evolved from an angry, thrashy, finger-picking style into something much more mellow and jazzy. The opening title track sets the scene well, with its funky beats and long-term collaborator Maceo Parker‘s alto sax noodling away over DiFranco’s half-sung, half-rapped vocals. It’s not such a departure from recent records like Red Letter Day, but it’s a million miles away from her mid-’90s heyday.

Play God brings the funk back but tackles similarly weighty subjects, as Ivan Neville’s squelchy bass accompanies a fierce pro-choice anthem – “you get to run the world in your special way… I must insist you leave this one thing to me”, while the closing Deferred Gratification is a wistful, hopeful look at the future generation (“I got kids and so do my friends, it’ll never be our world again”).

The general tone is laid-back and jazzy, yet sometimes DiFranco turns up the volume to pleasing effect – the juddering Spider is full of pounding drums, electric guitars and breathless vocals, while Even More accentuates its already warm and welcoming sound with a superb horn section. At the other end of the scale is the minimal Sasquatch, which almost uses DiFranco’s breathing as its own percussion, and Zizzing, which is as haunting as you’d expect from a song which features Justin Vernon on backing vocals.

Binary is an album which is shot through with the sort of confidence that only an artist nearly 30 years into her career can bring. While the world may seem to take an ever darker turn with each spin, it’s even more comforting to have Ani DiFranco to act as our light against the gloom.