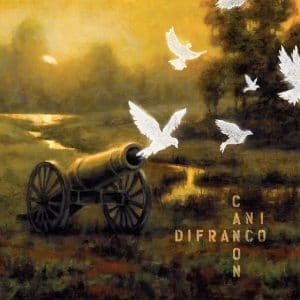 She’s released 18 albums in almost as many years, she’s recorded with artists as diverse as Prince, Cyndi Lauper and Maceo Parker, and was recently named alongside U2 and Nirvana as one of the most influential artists of the last 25 years. Yet you’ve probably never heard the name Ani DiFranco before, have you?

She’s never had a Number 1 single or even flirted with the mainstream, preferring instead to self-release all of her records on her own Righteous Babe label. In an age where the arena filling sounds of Kaiser Chiefs or Hard-Fi can be laughably described as ‘indie’, DiFranco is one artist who is truly and wholly independent.

Canon is her first ever career retrospective (a true ‘best of’ would stretch to four or five discs), moving chronologically from her early, acoustic offerings through to the latter-day experiments with jazz, blues and funk. Fittingly for an artist who’s spent half her life on stage, there’s also live tracks and also a couple of her spoken word numbers. The odd thing is that two discs and 35 tracks are nowhere near enough to represent the true genius of Ani DiFranco.

Nevertheless, this is a great introduction for any strangers to DiFranco’s work. For a woman with such a stern reputation as an intensely political, feminist figure, it may be surprising how personal some of the songs on the first disc are. You Had Time is one of the most gorgeous break-up songs written, from the soft piano opening the song to the devastating lyrical couplet of “you are a china shop and I am a bull / you are really good food and I am full”.

There’s also the marvellous lyricism of Cradle And All – talk of the “garbage swirls like a cyclone” on New York’s streets (“the city that never shuts up”), while DiFranco tears into her guitar like a woman possessed. Failed relationships come under the DiFranco eye again on Untouchable Face (with its unforgettable “fuck you, and your untouchable face” chorus), while Dilate would almost be too sad for words (the way DiFranco delivers the line “I am in love with you, and it is no fun” is enough to break your heart), if it wasn’t for the uplifting power of the music.

The uninitiated may also be surprised to hear how commercial a lot of DiFranco’s material is. 32 Flavours could easily sit on daytime radio – as indeed it did for a while, when covered by Alana Davis, much to DiFranco’s core fanbase’s disgust – while Little Plastic Castle mixes an uplifting brass section with self-referential lyrics (“people talk about my image as if I come in two dimensions, like lipstick is a sign of my declining mind”).

Here For Now, from the Evolve album, sees DiFranco move away from her folk roots into a more jazzy direction, while Paradigm is a touching look back at her roots where her interests in politics and feminism were born. Hypnotised meanwhile, from her most recent studio album Reprieve, proves that she hasn’t lost her touch for a beautifully simple and effective love song.

For DiFranco completists, there’s the added bonus of five songs being re-recorded – some, like Both Hands have been transformed from an acoustic meander to a fully-fledged electric romp, while others, such as the beautifully languid Overlap, have had only minimal changes made to them. It’s a nice touch, giving the compilation that personal touch that DiFranco always invests in her work.

So if you’ve never heard of the self-styled ‘lil folk singer’, Canon is the perfect place to start. Buy this, and then embark on the adventure of exploring her immense back catalogue. It’s a journey you won’t regret starting.