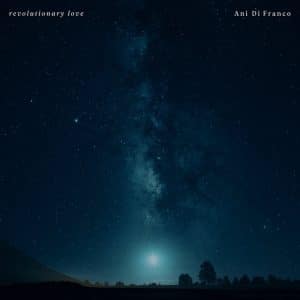 It’s been a tumultuous few years for the world in general, and Ani DiFranco has been uncharacteristically quiet. The New York native is famously prolific (she managed to release 10 albums during the 1990s), but motherhood and writing a memoir, No Walls And The Recurring Dream, means that the recording process has been put on the backburner somewhat.

Yet that doesn’t mean she’s silent about what’s been happening in the United States (and the wider world) over the last few years – although don’t expect to hear the explicit anger and defiance that marked her earlier work. DiFranco’s sound has slowly morphed from the furious, frenetic folk that made her name, and Revolutionary Love sounds much like her more recent output: languid, deliberate jazzy laments that blend the personal with the political.

While it’s a shame not to hear her frantic finger-picking guitar in action (in her live shows, she’s one of the most thrilling guitarists you can witness), there’s still much to admire in the more modern version of DiFranco. Many of the songs on the album were written before the Covid-19 pandemic and recorded over two days during February 2020 in North Carolina. They were heavily influenced by Valerie Kaur’s book See No Stranger, which topically discusses how to live compassionately in catastrophic times.

The title track is a brave one to open with – seven minutes of soulful, laid-back folk filled with slide guitar and gently brushed drums as DiFranco talks of a calmer way to live through troubled times: “You can’t make me hate you, and carry that hate around.” It’s not an album opener that leaps out and grabs you, but rather one that softly and gently welcomes you in.

Elsewhere, some menacing strings that recall PJ Harvey‘s Man Sized introduce the spiky, sardonic Chloroform while Station Identification indulges her more experimental side – a near instrumental which begins as an improvisational jam, before slowly taking shape before your ears, as DiFranco softly sings “Why are we fighting each other… we should be working together”. It’s a dreamlike listen that asserts a hypnotic hook on the listener.

There are nods to the political upheaval of the past few years on the album’s best track, Contagious, with a Michelle Obama quote of “They go low, we go high”, and the lead single Do And Die harks back to the Trump presidency with talk of “on Pennsylvania Avenue, the sheetless KKK”. Possibly though, it’s the strikingly beautiful Shrinking Violet which best sums up the panic and unease of the last 12 months, with its haunting refrain of “mostly I’m afraid of you”.

Admittedly there are times when it becomes rather too shapeless and meandering, with the penultimate instrumental track Confluence sounding a bit anonymous and bland for comfort. Thankfully, Crocus ends the record on an uplifting note, a song for survivors that takes a look around and proclaims “looks like we maybe made it through something wild” – a reminder that no matter how dark things become, this too shall pass. It’s the sort of comforting salve we need from one of this generation’s finest songwriters.