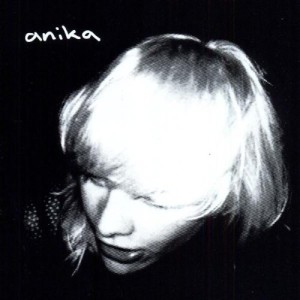 It isn’t often that an album’s press release can be said to hit the nail on the head, but the description here of Anika’s self-titled release as ‘uneasy easy listening’ is spot on.

Anika is the protégé of a certain Geoff Barrow, realised through the medium of his recent experimental project BEAK>. She found herself unexpectedly involved with the trio through a meeting in her day job guise as a music promoter, the four realising they had a lot in common where musical likes and dislikes were concerned. The rest, they say, is history, with the resultant record completed in just 12 days of spontaneity.

It is immediately a disconcerting listen, though is strangely easy to relegate from the foreground to the background musically, if not lyrically. The lyrics that bring it right through to the front are observations such as those made in Masters Of War, where Anika proclaims, “I see through your eyes and I see through your brain, like I see through the water that runs down my drain”. With a frisson like that, more careful listening is required, less paranoia get the better of the listener. Even worse is Sadness Hides The Sun, which observes how ‘once there was laughter and now there is fear’, its deadpan voice strangely effective and complemented by a macabre, House of Horror organ.

Influences abound but are similarly hard to pinpoint. A bit of Joy Division here, possibly some Siouxsie and the Banshees there, or even a waft of The Specials, drifting in on the back of some occasionally loose dubby rhythms that never quite assert themselves. The structure of the songs themselves is free, too, from the brief insights of Yang Yang and End Of The World to the sprawling Masters Of War. Attempts to impose riffs on the music are frequent but often doomed to failure, the disembodied voice clasping the attention above its restless accompaniment.

Moments of discomfort are frequent, meaning that attempts to make the music more ambient are stopped in their tracks, that comfortable sofa suddenly developing a nail or two when you sit down on it.

Anika, then, has made an intriguing record, but not one that should be listened to by nervy people in isolation. Full of lyrical and musical contradictions, such as the exhortation to ‘join the revolution’ in Yang Yang, it isn’t exactly rabble rousing – but has a strange allure nonetheless.