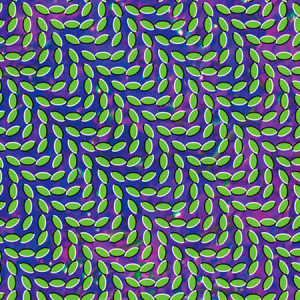 Band Aid‘s Do They Know It’s Christmas? But they manage to create the tune in such a way that is more akin to the tingling excitement you heard Band Aid as a kid, rather than the disenchanted, cynical eyes that so many see it through today.

Weighing in at 55 minutes, the 11 tracks are an exhilarating yet exhausting journey. But then the album ends with the most celebratory and upbeat track on the album, Brother Sport.

The band have honed their craft. There is more space and focus than before, with no song topping six minutes (save for the finalé). It is a million miles from the awkward, self-aware recordings that bemused and frustrated people eight or so years ago when the band surfaced. However, the tunes are undoubtedly Animal Collective’s.

Merriweather could be described as the meeting point of Strawberry Jam and Person Pitch, picking out the best elements of both whilst sounding unlike anything yet like everything you have ever heard. It is their most accessible record, and owes as much to the world of dance as it does any other of their influences.

Oozing fun out of every pore, this record is the perfect tonic to the increasingly troubled times that 2009 brings with it and will most likely feature on many of those Best Of lists come December.