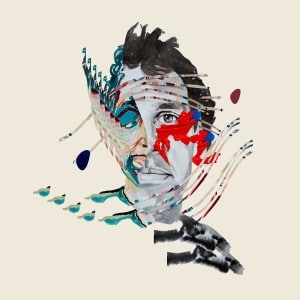 Animal Collective are nothing if not the most frustrating of bands. In 2009, they delivered the scintillating Merriweather Post Pavillion and then managed to follow it up with the career nadir that Centipede HZ was to many – a confused, bullish effort that lacked the grace and flair of its predecessor. This time round, in typically defiant form they have declined to return to Merriweather’s subtle charms and opted to unleash a full palette with ferocious abandon.

FloriDada was an excellent choice of single to sound in the arrival of the new record. Its bonkers boing-boing beats, breathless pace and jaunty vocals are a fairly good indicator for the preoccupations of the album and its makers. If the relentless ditty causes you to exclaim “for the love of god make it stop!” you’re probably best downing cans and moving on now. If, however, you were captivated by its persistent charms, you’d better make sure you have the constitution to proceed, for Paint With yields no mercy.

Essentially, it’s an album they’ve thrown an entire paint box at, and one that could undoubtedly do with the odd subtle stroke and flourish. But if you like your music of the Jackson Pollock variety you’re in for a treat. Hocus Pocus splatters and smears layered vocals over an oom-pah beat and a Super Mario Bros style synth line. It’s an absorbing example of the mischievous and incomprehensible compositions that Animal Collective have committed to making on this record.

Of course, they’ve made psychedelic experimental records before – it’s what they do. But none has been as hallucinatory as this. And the psychedelia they are evoking is not the hippy-dippy kind; rather it’s a chemical fusion carried out by robots. Natural Selection’s choppy vocals, techno beat and dizzying synths sound like the creation of androids on MDMA, with an effect that is at once consuming and disorientating. What the record lacks is the youthful, loose touch of Feels’ Banshee Beat or Loch Raven; something – anything – sweet and soothing. But the band choose to omit the chill-out room and instead wade into frenzied psychosis. They push forward with a brute of a record that bullies the listener into a world of aggressive phantasmagoria.

Inevitably there are moments when you wished they’d rein it in a little and take a breather from the very many sonic tricks they’re painting with. And you often can’t help but lament the lack of human compassion: the affecting and crafted songwriting of Merriweather Post Pavillion is somewhat lost. But there are glimpses of that capacity on Burglars which has some lovely Beach Boys-esque backing vocals, and many of the tracks are far more intoxicating than their previous record ever offered. This album is probably what Vampire Weekend would sound like if they loaded up on hallucinogenic drugs and synthesisers, and it’s unwaveringly chipper in its application.

This is turbo-charged psych rock that leaves you feeling that you’ve experienced a rollercoaster ride through Willy Wonka’s factory on acid. For the most part, it’s exhilarating in its immediacy, but occasionally it becomes overwhelmingly nauseating. Despite its myriad of styles, it retains a cohesive thread that Centipede HZ failed to achieve. This is a band still brimming with imagination on their 10th record which, this time round, makes for an exhausting listen. The sometimes wearying experience is symptomatic of their fanatical administration of ideas and techniques on their arrangements that borders on over-indulgence.

And so, in many respects Animal Collective are back on form: that is, being divisive as ever. They’ve made an authentically psychotropic, kaleidoscopic trip of a record: brace yourself and beware the come-down.