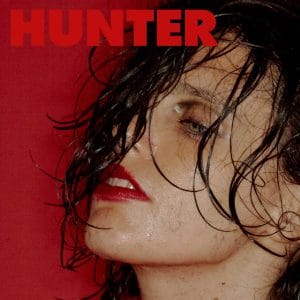 Back in 2011, Anna Calvi’s eponymous debut album seemed to herald the arrival of a highly distinctive, important new artist. A confident, bewitching brew of musical textures centred around Calvi’s incendiary guitar playing and often extraordinary voice, it rightly garnered widespread critical acclaim, including nominations for a BRIT Award and the Mercury Music Prize. She then backed up her breakthrough with 2013 follow up One Breath, an equally excellent, intriguing record that achieved a second Mercury nomination.

Since then, the diminutive Londoner has kept a relatively low profile, focusing on side projects including contributing to 2016’s Strung Out In Heaven, a David Bowie covers EP, and writing the music for a Germany-staged opera, The Sandman, the following year. But now Calvi’s back with third album Hunter, produced by Nick Launay (Nick Cave, Grinderman) and featuring Adrian Utley from Portishead on keys and Martyn Casey from The Bad Seeds on bass alongside Calvi’s regular band, multi-instrumentalist Mally Harpaz and Alex Thomas on drums.

Hunter is a free-spirited, sometimes confrontational record, built around the theme of seeking an identity without boundaries, with a particular emphasis on deconstructing traditional gender roles. In Calvi’s own words, “I want to go beyond gender. I don’t want to have to choose between the male and female in me. I’m fighting against feeling an outsider and trying to find a place that feels like home.” This tension is dominant in Calvi’s lyrics throughout, particularly in songs like opener As A Man – a study of a woman adopting male behaviours – and first single Don’t Beat The Girl Out Of My Boy, which rallies against young children being conditioned to conform to established gender stereotypes.

Musically, the quiet-loud dynamic of Calvi’s first two records is largely adhered to again, as is the prevailing mood of menace and dysfunction. Some tracks – As A Man and Don’t Beat The Girl Out Of My Boy being good examples – are more conventional rock songs, while others are more fluid and experimental. Of the latter category, Swimming Pool, a graceful, shimmering ballad, showcases Calvi at her most impressively cinematic, with her voice soaring rather magnificently above sweeping strings.

The downside of Hunter is that, for all the invention and atmosphere, there’s an absence of truly memorable melodies that linger in the brain. Several songs swagger and shout in a way that’s rather grating – Indies And Paradise, with its uncharacteristically inelegant refrain of being “arse in the air in paradise”, is the biggest culprit, but there are other tracks here that reduce Calvi to a performer it’s easier to admire than love. Chain, which begins with Calvi singing alone with delicate vulnerability, then blitzes through the gears at breakneck speed to full volume howling, seeming to forget that perhaps there could be a more interesting journey in between. All in all, a record of frustrating highs and lows, rather than the full package.