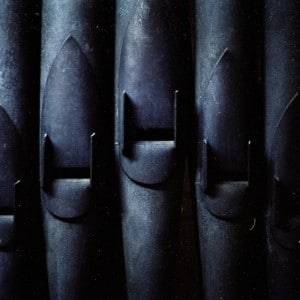 With Sigur Rós also releasing their latest album this week, Anna von Hausswolff’s stark but outstanding second offering Ceremony is a timely reminder that the celebrated Icelanders don’t have it all their own way when it comes to widescreen Nordic atmospherics.

Despite possessing a name that evokes images of yodelling nuns running gaily through Alpine valleys, von Hausswolff actually hails from Gothenburg in Sweden and her music is anything but joyful. Following some strong reviews in her homeland for her arresting debut Singing From The Grave and supporting slots with M Ward and Tindersticks among others, Ceremony is being given a well deserved global release.

Von Hausswolff’s piercing, dramatic voice has been predictably but understandably compared to Kate Bush, but we don’t even hear it for the first time on Ceremony until nearly five minutes into the second track, the shatteringly powerful Deathbed (is anyone spotting a titular theme emerging here…). Before that, we get waves of ominous keyboards, crashing heavy metal guitars and most memorably of all, a vast-sounding church organ, recorded by the Swede in her home city’s Annedalskyrkan cathedral. It’s all relentlessly gloomy but mightily impressive, like the soundtrack to a particularly bleak but compelling horror movie.

It’s only on third song Mountains Crave that von Hausswolff reveals herself fully, on what’s a comparatively light, poppy song of just over three minutes that would fit very nicely on Bat For Lashes’ The Haunted Man album. It’s then back to the portentous, organ-led dynamics for the next two tracks, Goodbye and Red Sun, but one of Ceremony’s greatest strengths is that although the overall tone is dark and foreboding, there are different musical textures and shades applied subtly throughout the record.

For example, Epitaph Of Daniel (a real highlight) sees the organ dynamics toned down a notch to allow some evocative pedal steel guitar to twang elegantly above it. In contrast, No Body is oppressive almost to the point of being terrifying with its distorted slabs of mechanical noise and ambient echoes, while Liturgy Of Light is a prettily lilting folk song, but one that sounds like it’s being played in a subterranean cave. Harmonica begins with a vocal that could be a warped, long lost country and western tune, before fading out with a Lord Of The Rings-like epic melody. Ocean’s gentle cascades of piano gradually gather momentum until they’re joined by von Hausswolff at her Bush-like best, backed by a gospel choir. This is an artist who is always ambitious and often staggeringly bold.

The high standard is maintained right until the end of Ceremony, with von Hausswolff’s soaring, operatic vocal on Sova and the driving Funeral For My Future Children, which, considering it’s less than cheerful title, is a strangely exultant, almost triumphant closer.

With prevalent lyrical themes of death and loss, Ceremony is not music for those seeking sunny summer escapism. Yet when compared to UK gothic revivalists such as Esben And The Witch, it’s an album of striking confidence, immense compositional flair and colossal, richly cinematic arrangements. If your idea of a good time is an hour spent in the company of a dominant woman who will slowly overpower you with her irresistibly icy majesty, then Anna Von Hausswolff could well be the girl you’re looking for.