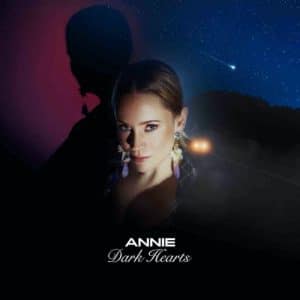 It’s a rare artist who can step away for 11 years and still command attention on their return – trends shift, listeners grow up, icons tumble back down to Earth – and Bergen’s Annie, apart from a smattering of tracks and features, has been absent since 2009’s Xenomania-helmed Don’t Stop. But now she’s back with Dark Hearts, a grown-up album of sleek sophisti-pop and ’80s influences, synths that shine with a fluorescent glow, and unobtrusive beats. It’s blissful.

In Heaven finds Annie adopting a cadence reminiscent of Saint Etienne‘s Sarah Cracknell, and the hook provides a beautiful release with its swooping and cascading melodies. A plaintive guitar riff complements the vocals nicely, while the synth bass alternates between a growl and a mumble as the track’s dynamics ebb and flow. It’s a great opener, and it’s followed by the wistful, nostalgic vibes of The Streets Where I Belong (“Whatever happened to us all? / wherever I go I’ll recall / all those summer days / in our town down by the bay / oh Annie, close your eyes, pretend / and then you’re back there once again”). The title track is terrific, typifying the moody, after-dark feel of much of the album with a lolloping synth hook at its core.

Miracle Mile wins us over with its sheer prettiness, mid-tempo drums framing melodious guitar chords and angelic vocal highs, while Forever ’92 is one of the most overtly poppy tracks on the album, once again with a reminiscent tang to the lyrics.

But after this halfway point the dominant aesthetic of Dark Hearts begins to cloy: Mermaid Dreams’ spoken word sounds very meaningful – especially the manipulated vocals – but the track doesn’t have much to offer beyond warmed-over synthwave, and The Countdown To The End Of The World aims for dystopian, but comes across slightly mind-numbing.

The main problem is Annie’s singing: while she has a lovely voice, she seems intent on mainly showing off one aspect of it here. We have lots of stately, elegant performances, featuring post-production that takes her tone to a slightly uncanny place, and this doesn’t leave much room for fun or syncopation or charisma. The welcome exceptions are The Bomb, a refreshingly fast-paced ravey number with a tongue-in-cheek apocalyptic theme that’s executed perfectly, and the punchy beats of the album’s title track, which give Annie’s thoughtful vocals more impact.

American Cars rides decidedly retro instrumentation, the boom and hiss of the 808 accompanying synths that belong in a Stranger Things episode, while the lyrics concern lust of a perverse, Ballardian variety (“I’ll let go of the wheel, and take hold of my heart / so before we crash, kiss me under the stars / in American cars”). Stay Tomorrow brings some mystique to the proceedings, an enigmatic melody that winds its way around an Escher-esque chord sequence and light, lo-fi instrumentation.

Dark Hearts ends more with a whimper than a bang, as its two final tracks wash over the ears inoffensively. The Untold Story is perhaps meant to be an emotional climax, as the synth pads swell and the bassline hums away, but with Annie’s delivery remaining in stately second gear and its songwriting that of a dirgey ABBA number, it passes with little consequence. It’s Finally Over’s lazy guitar and 6/8 brush drums are nice, but not emotionally affecting or otherwise remarkable, while the lyrics are exquisitely bland. Thus ends an alternately enjoyable and frustrating record.

Dark Hearts is a mixed bag: it has many well-crafted moments and some stellar production choices, and there aren’t any outright bad songs; the likelihood is that some of the less obviously pop moments have the potential to grow over time. But it’s stylistically too limited to be this lengthy, and fans of the cheeky Chewing Gum songstress may sorely miss that aspect of her persona.