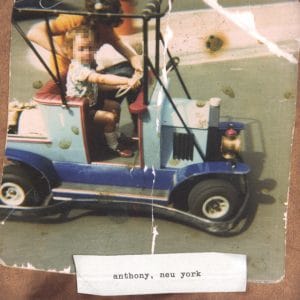 This is Anthony Reynolds‘ new album. Is it Jack? Is it Jacques? No, it’s anthony (note the lower case…) Neu York is the first album from Reynolds solo after the split with long-time collaborator Matthew Scott, and it’s somewhat of a fusion of the styles of the past.

Or rather, half the album is like one, and half like the other. It kicks off in typically idiosyncratic style. The pips lead into a charming song all about the radio – “I can’t wait / to get sick / so I can go to bed / the covers over / and the speakers by my head…” Yes, it was always thus. Disarming lyrics and a background of varied and always interesting, almost ambient sound.

Lushlife is very Jack – though production on this album is nothing like as polished as the landmark albums Pioneer Soundtracks and The Jazz Age. A lovely, flowing song, and the Reynolds croon is in good nick: “We’re too beautiful to die / while we’re too busy living / such a lush life / oh my…” Lovely acoustic guitar too, and shades of Lolita Elle, also echoed in The Sad Streets – another upbeat ballad despite the title.

It starts to get a bit more experimental – more Jacques in How To Make Love mode – for the prelude to Machiavellian Girl, but when the track itself kicks in there’s a terrific techno backbeat more reminiscent of The End Of The Way It’s Always Been. Classic Reynolds lyrics here – the themes of love and booze are never far away in his songs: “Tonight we’ll get drunk and fall in love ’til the morning f***s it up…”

Good Times is very low-key Jacques, just the voice, a softly picked acoustic guitar, a few eerie background noises and some very mournful lyrics. Dear Melvyn is a delightful homage to the influence The South Bank Show had on an impressionable youth: “Teenage bedroom 1987 / I watch a black and white portable television…” Wry and charming stuff.

The second half of the album is patchy, but some tracks reward careful listening. If July Were A Kingdom is one of the standout tracks, with its otherworldly, distant sound and overlaid crackles as if from a scratchy old LP. This is a downbeat song with an epic trying to get out, and atmospheric violin. 2,000 Miles (Boxing Day Blues) is more gloomy stuff but beautiful if you’re in the right mood…

I Sit With The Smokers is a real oddity – an unidentified female voice reading over random electronica. Can’t really see the point of this track, I must say. Ditto Dalston Interlude, which I assume is Reynolds & friends recorded chatting idly in the days before he moved out of said location.

The album ends on a lovely note however, with a hauntingly beautiful and strange song on another of Reynolds continuing themes. Surreal lyrics and strangely warped melodies crawl all through Drugs Are My Drugs. It’s probably not a track to wake up to but is stunning very late at night. Which, now I come to think of it, goes for a lot of Anthony Reynolds’ music.

This album doesn’t blow you away as the early ones did, but it’s good – and very good in places – and that’s enough to be going on with.