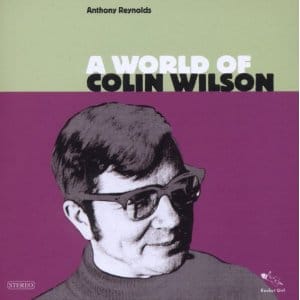 Colin Wilson is an English philosopher and novelist who came to prominence in the mid-1950s as a proponent of the “Angry Young Men” collective, a loose selection of British writers including John Osborne and Kingsley Amis. This rather amorphous literary group were tenuously bound by their liberal political views and critical view of modern society. Wilson’s inauguration into the collective came with his publication of The Outsider in 1956, now seen as a seminal work of “new existentialism”, as Wilson prefers his philosophy to be termed.

The Welsh musician Anthony Reynolds, founding member of the bands Jack and Jacques, describes his first encounter with Wilson’s writing, as a teenager in his school library, as almost epiphanic. As such, A World Of Colin Wilson can be seen as Reynolds’ ode to the writer, a reverent artefact attesting to the latter’s impact on the life of the former. The album consists of a selection of recordings of Wilson reading his own texts, situated within a gliding ambient soundscape of distant pianos and synths. Yet this record largely eschews the mechanisms of a spoken word album, Wilson’s recitations echo furtively through the aural space, with long expanses of largely obscured texts punctuated with fleeting moments of lucidity.

Thus the resulting work becomes more of a heavily mediated sonic realisation of Wilson’s philosophy than any sort of clear setting of the texts. Conceptually intriguing, and often aurally haunting, this work’s impact will probably largely depend on respective listeners’ familiarity with Wilson’s writing. A failing particularly well illustrated on the track Why We Make It Difficult On Ourselves. A meandering guitar line is situated amongst a succession of peripheral industrial noise and distant samples of a choir, creating a rather uninteresting atmosphere throughout which brief snippets of Wilson’s recital surface. Such is the elusive use of his voice, the glimpses of text are reduced either to inaudible babble or aphoristic vacuity. The more nebulous tracks such as this eradicate any possibility of the communication of a coherent message, rendering themselves essentially redundant to any listener without an extensive knowledge of the author.

That said, there are moments of considerable narrative cohesion throughout A World Of Colin Wilson, hinting at the potential of the project. Perhaps most striking is New York Ozone Memory, a spectral four minutes of music exploring Wilson’s famous notion of “Faculty X”. Backed with a glimmering coalescence of reversed guitars and evanescent wordless vocals, Wilson describes an experience of being on the beach in England and catching a hint of an “ozoney sort of smell” which seemed to transport him physically to New York’s Grand Central Station. The mystique of the music compliments Wilson’s otherworldly tale in a shivering synergy of language and sound. Perhaps Reynolds saw the recitative nature of this track as clunky, too unambiguous in its meaning, and instead opted for the rather impenetrable treatment of the texts found elsewhere on this album. Yet, one can’t help but wonder what A World Of Colin Wilson might have been had its creator conceded a little to his listeners’ needs.