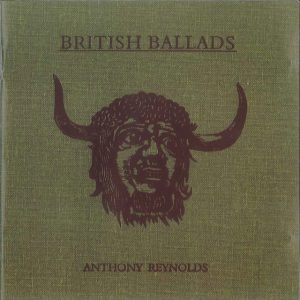 Back in the 1990s Anthony Reynolds fronted wonderful indie orchestral romantics Jack and the spin-off, Jacques. They weaved a drunken path through empty wine bottles, broken hearts, poetry, past Nico‘s children and out onto rain soaked streets. Reynolds’ lyrics soundtracked the lost, the lonely, the freaks and outsiders. It has been a long hiatus. Jack played their final gigs in 2002. British Ballads is Anthony Reynolds’ first full release under his own name.

From the gentle brushed drums and wistful melody that opens I know You Know its evident that Reynolds has lost none of his melodic grace or musical ambition. This is not a low key return. Reynolds has always seemed like the bastard offspring of Marianne Faithfull and Dylan Thomas, a hard drinking poet with a ageless sense of beauty. The songs on British Ballads bear this out.

There is poetry and alcohol and a sense of deep rooted melancholy. Those Kind Of Songs with its mordant strings, strident piano part and the velvet kiss of Reynolds’ silky baritone voice is like a lost out-take from Scott 4. It has the ennui, the glide of those classic Scott Walker tracks, the closing coda is divine. It should come as no surprise that Reynolds recently finished writing a biography of the Walker Brothers.

Reynolds seems solipsistic. Living a life of dreams, he is far removed from the world outside, the world beyond his fervent imagination. This could have been a recipe for disaster, but for Reynolds’ strong vision, the force of his will sculpturing a collection of songs that sound alive with possibilities.

A Quiet Life, his ode to staying home, is strangely life affirming. The battered acoustic guitar provides the perfect foil for his sombre tones. The litany of nightmares beyond the front door rings true – it’s easy to see why he would want to stay curled up with his second hand paperbacks and bottles of wine.

Thankfully Country Girl is not a cover of the Primal Scream single. This is much darker; a broken folk tune heard through the haze of memory. The track is built around the whisper of a violin melody, a tart guitar part and the gentlest of drum tracks. Reynolds croon is pitched against the crystal clear voice of Vashti Bunyan to make a piece that lingers in the memory like the last kiss of a departed lover.

British Ballads is brilliantly arranged. Reynolds and the producer Julian Simmons have draped the songs in a wonderful variety of setting. The closing Song Of Leaving bursts out in a wild strum of guitars, a nagging circling riff and the rattle of drums. Bread And Wine is all drum machine patter, swirling synth noise and a repeating piano motif. Where The Dead Live, featuring Liberace-like piano from John Howard, who also duets, is like John Cale‘s solo work produced by Slint, after a night on the tiles. A kind post-rock piano ballad, but much better than that sounds. When Reynolds’ voice rises up on the strings, multitracked into a choir, it ascends into the heavens.

This is a hopeless (hopeful?) romantic triumph. It is a record completely out of step with the current musical climate. Let’s raise glasses to it in the hope it gets heard above the December din of X-Factor winners and compilation CDs. Too late for record of the year?