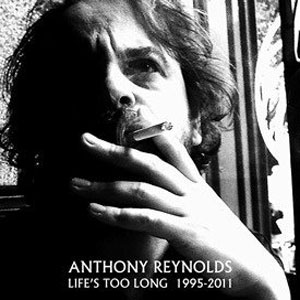 Back in 2000 an album called To Stars, by a band named Jacques, showed off Anthony Reynolds‘ Welsh croon of a voice slipping and sliding in a mixture of songs both upbeat and despairing. Blue Party and London Loves You, two of the best tracks from that album, perfectly represent the shabby-chic glory of the band’s sound and make for a pleasing in-road to Life Is Too Long: Songs 1995-2011, Reynolds’ double-disc career collection.

Reynolds has had many incarnations and almost as many record labels over the span of this retrospective, kicking off with the extraordinary Pioneer Soundtracks from the band Jack, with Reynolds and Matthew Scott at its core. Originally released in 1996 to great acclaim and then re-released in 2007 with additional tracks, it’s one of those albums that never grow stale. Rocking beats and poetic lyrics about love, death and drinking carry you with them, and inspired orchestration – with masses of judiciously used strings – creates an unforgettable sound. Filthy Names is as lush as it comes, in every sense – the voice at its best, the orchestration plaintive and beguiling. Biography Of A First Son rollicks along and White Jazz and Wintercomessummer play with sound and atmosphere.

The Jazz Age followed in 1998 with the incomparable song of lost love, 3 O’Clock In The Morning, the fun, name-dropping Cinematic that chronicles Reynolds’ love of literature (Charles Bukowski and John Fante are constant muses), the visual arts, and in particular European film-makers. These songs are never ordinary, and usually stuffed full of cultural references, some more obscure than others.

Things fell apart a bit after the end of his collaboration with Matthew Scott and the split from Too Pure, but there have been some memorable moments since, often on minor labels and very frequently released as EPs, so this collection is a real treasure chest bringing them together. From The End Of The Way It’s Always Been (2002) we have The Emperor Of New London, with the unforgettable voiceover by Dan Fante, son of John – “I’m so fucking high death wouldn’t dare interrupt me now” – and Sleepin’ Makes Me Thirsty, a splendid lament to lost youth. The romantic If July Were A Kingdom is from Neu York (2004), the stately magnificence of The Disappointed from British Ballads (2007).

Reynolds’ experimental side is represented by Life Is All There Is, with the voice of the British philosopher and novelist Colin Wilson, and the sweet, early track Whilst High I Had This Premonition also makes the cut. There are a couple of terrific live versions from 2002 (Lolita Elle, Maybe My Love Doesn’t Answer Anything In You Anymore), and rarities such as Beauty And Me, from one of the many EPs. And the final, and title, track is a new song that returns to the glorious, romantic melancholy that is the hallmark of this complex, talented and sometimes infuriatingly self-destructive artist.

A treat for Reynolds’ hardcore fans, and a brilliant introduction for those who have yet to be sucked into this poetic and complex world, Life Is Too Long: Songs 1995-2011 makes the case for Reynolds’ poetic canon of work as one replete with many an underappreciated gem.