Anthrax – We’ve Come For You All 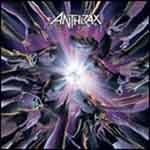 Along with the delicately named Slayer, Megadeth and Metallica, Anthrax were one of the original ‘Big Four’ thrash metal bands back in the mid-1980s. But do not be fooled into thinking that that makes Anthrax a bunch of hairy, irrelevant nutcases. No, Anthrax has always been one of the most innovative bands around. The current fetish for rap-metal, for instance, as in evidence through the multi-million album sales of Linkin Park and Limp Bizkit, has its roots in Anthrax’s I’m The Man single from 1987, not to speak of the ultimate amalgam of rap and metal heavyweights in their collaboration with Public Enemy on 1991’s Bring The Noise.

If Anthrax’s public profile dipped somewhat after creating one of the best metal albums of all time in 1993’s The Sound Of White Noise, the band was well and truly back in the public eye in the aftermath of September 11. The unsurprising hysteria surrounding the anthrax breakout in US postal offices led to the band being unfairly pilloried to the extent that they changed their web-site address to ‘anthraxtheband.com’ and even have a link on the front page to anthrax the disease.

Given these circumstances, one might have thought that Anthrax would sneak back onto the scene quietly. Instead, their ninth album, confrontationally titled, We’ve Come For You All, is a bold, sleek and raucous slab of modern metal that stomps all over a lot of what passes for heavy music these days.

That this album is up there with Anthrax’s best is evident from the moment the album’s intro, erm, Intro, kicks in with gentle, acoustic strumming deceptively camouflaging an ever-increasing swathe of guitar noise underneath. By the time the guitars have reached their crescendo, What Doesn’t Die explodes into action with a barrage of incisive, razor-sharp riffs and some of the most jaw-dropping bass pedalling I have ever heard, courtesy of drummer Charlie Benante. Add John Bush’s expert, impassioned vocals into the mix and you have a recipe for one of Anthrax’s finest ever moments, and that is saying something.

The remainder of the album does not disappoint either. Nobody Knows Anything is another adrenaline-infused, metallic masterpiece with weighty riffs and drumming that needs to be heard to be believed. Safe Home takes its foot of the accelerator, to good effect, in order to deliver a mid-paced rock punch, while Caddilac Rock Box (okay, so they can’t spell) is a Southern fried boogie that sounds like Lynyrd Skynyrd jamming with Black Sabbath.

All in all then, this is a yet another mighty album from a still mighty band. At a time when even the rock and metal world seems beset by the curse of bubblegum ephemera it is refreshing to see a band continuing to raise the bar nineteen years after its debut album. And there aren’t many ’80s bands you can say that about…