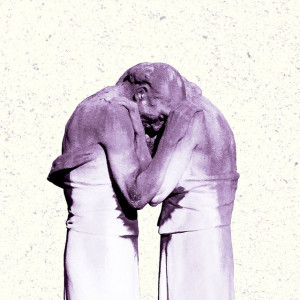 Summer’s here and the time is right for dancing in the streets. There’s a World Cup on the telly, and at least one of your friends will be holding a barbecue in the next couple of weeks. You’re going to need a summer soundtrack.

The Antlers are not the group for that summer soundtrack. This is the band whose third record was a concept album about a doomed love affair between a hospice worker and a woman with terminal cancer. A band whose last album, Burst Apart, included song titles such as Every Night My Teeth Are Falling Out and Putting The Dog To Sleep. A band who, in a contest as to who could make a grown man cry, would probably tie with The National and Elbow.

Talking of The National, you may expect Familiars to be the album that finally breaks the Brooklyn trio into the big time, the one that sees them follow Matt Berninger and company into the world’s stadiums and arenas. They’re similarly critically adored, and with each release a bigger buzz seems to have been generated. Familiars probably won’t be that album, not because it isn’t excellent, but because an album this fragile and subtle is always going to remain a cult concern.

Familiars isn’t an album conducive to background listening – it’s a record you need to set aside an hour for to bask in its nine tracks – all of which have a running time of over five minutes. And while it may not prove as unbearably moving as either Hospice or Burst Apart could be, there are moments of heart-stopping beauty contained on Familiars that will be tough for any other band to match this year.

It’s an album that nicely demonstrates how much The Antlers’ sound has evolved from their lo-fi debut of Uprooted. On Familiars, every song is beautifully produced and layered with horn arrangements. Those horns are pretty much the trademark of this album – be it the muted trumpets on the woozy Doppleganger, the ghostly brass on Revisited or the atmospheric arrangements on the closing Refuge, the horns add a new dimension to The Antlers’ sound.

Of course, there’s also Peter Siberman’s voice to pull on the heartstrings as well. On the band’s previous two albums, it was easy to identify with his heartbreak: he was singing songs about death and the break-up of a relationship, respectively. On Familiars, the lyrics are more abstract, but no less affecting. Hotel sounds like a vaguely sinister ode to transitional living, especially with Siberman’s growl of “Fuck now, I’m out of here tomorrow,” while Palace – featuring one of the most gorgeous introductions of the year, all twinkly piano and echoing trumpet – is a nostalgic, bittersweet look back to simpler times (“You were simpler, you were lighter, when we thought like little kids”).

Some of the songs on Familiars can seem a bit half-sketched, leaning more towards loosely improvised jams, such as the dreamy shuffle of Intruders or the hypnotic lilt of Parade. That’s no bad thing though (and obviously influenced by the band’s love of jazz and soul) and just goes to prove that they’re experts at setting moods – there aren’t many bands that can emotionally connect with their audience just by a simple guitar chord, but The Antlers are one of them.

So yes, ultimately, this isn’t the album that will break The Antlers into the big time. But it is a record that will grow its own audience over time, an audience that will slowly fall in love with its expertly controlled melancholy. Poignant, lush and beautifully played, this is another predictably wonderful record from The Antlers.