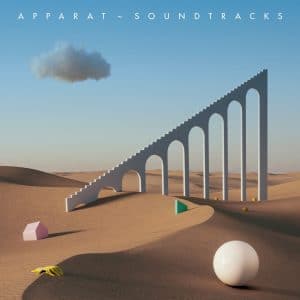 Soundtracks are an artistic oddity, intended to be an ingredient but frequently isolated and treated by vast numbers of people as a stand-alone product. It speaks to music’s versatility – it can hold you at rapt attention, or keep tedium at bay as you paint walls, or merely burble away inconsequentially in a shop – and electronic producer Sascha Ring, aka Apparat, demonstrates this nicely with a 4-disc compilation of soundtracks. They were produced between 2015 and 2020 with help from Philipp Thimm, and each one takes a different, self-consciously minimal approach to this singular artform.

Capri-Revolution (2018) is mainly based around plucky synths and stringed instruments, whether it’s the elegiac chords of La Gravidanza or the acoustic guitar finger-picking that sets the pace in Paestrum Neruvola. Repeating themes are deployed most effectively here, with Silia Reprise turning the mournful original into something more spacious and dubby, rather like Chill Out-era KLF. Aracneae, like the other final tracks of this collection, is most suited to out-of-context listening, its thoughtful vocal riding over gentle syncopation (“It’s like a flower growing in a room / trapped inside a dream, it’s the sweetest end / a fruit hanging from that first forbidden tree”).

Stay Still (2019) is more focused on electric guitar, creating some of the most luscious soundscapes of the compilation. Fire builds decaying ambience up to a cliff-edge, and after a period of silence dives into overdriven guitar chords and languorous bass, a stylish and evocative sequence, while a cover version of the Moderat song Bad Kingdom delivers trendy ’80s drums and a woozy arpeggiator accompanying the somewhat jaded vocal delivery. This disc is relatively brief, but manipulates a pretty sound palette to great effect, especially on Marlene’s Birthday: synth pads gently shimmering as reversed guitar licks orbit around them, segueing to more muted lo-fi chords to round off the blissful piece.

Damonen (2015), as indicated by the title, is in various places overtly ominous and spooky, a prime example being Joel. It features a music box manipulated to sound sinister and frigid, the clicking of its notes emphasised until the rolled chords scuttle like spiders, in a classic bastardisation of childish innocence. Hosea, Next Level pits gloomy piano chords against a retro synth lead, a mood of anticipation and dread only furthered by incidental drips, bangs and squeaks, but Sacharja lightens the mood considerably with its ornate pizzicato arrangement. The sound design of this disc is well-executed, but the composition is below par for this series.

Equals Sessions (2020) finishes the collection, and is influenced by the electronic styles Apparat is accustomed to on his studio albums. The selection of tunes bracketed (Live In Paris) are easily the highlights, as Love Theme creates an irresistible vibe of euphoria with powerful pads and cut-up guitar phrases, moving into Slice Jam’s polyrhythms and rapid-fire percussion. Elsewhere Dark Anthem provides gripping intensity courtesy of its swooping, mutating bassline, and Escape From Den is a return to the creepier side featuring an incessant pulse, an acidic drone and metallic percussion.

The breadth of creation over the course of this two-and-a-half hour compilation is extremely impressive, showing a keen sensitivity to the various styles of the cultural objects they were initially attached to. While not every track is suitable for the audience’s full attention, even the shortest interlude or the subtlest refrain is given a degree of purpose that carries over nicely to a purely aural experience. One can’t help but wonder what the result would be if all the music was revisited and revamped in the manner of Equals Sessions, but as it stands these LPs mark Apparat out as a soundtracker of distinction.