Apparatjik – Square Peg In A Round Hole 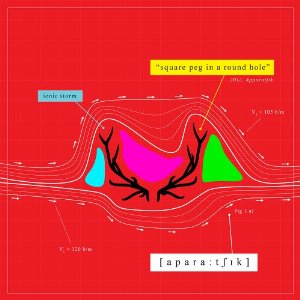 What to do as a member of a world-conquering band during downtime from bestriding stadiums across the globe with your latest multi-platinum ‘pseudo-alternative’ soft-rock offerings? Guy Berryman, bass-twanger with Coldplay, has teamed up with Magne Furuholmen (from A-ha), Jonas Bjerre (from Mew) and Martin Terefe (producer/songwriter to the stars) to create a loose musical collective that can rope in some big-name friends (as here in the shape of Pharrell Williams under his pseudonym Auto Goon) for a bit of a musical global ‘kick-about’.

Square Peg In A Round Hole is Apparatjik’s second album and it sounds like the sum of its parts, with added phased vocals and electro blips. That’s not necessarily a compliment; unfortunately Apparatjik come burdened with a slew of effects – vocoder vocals on every track become wearing even if you are Kanye West. Such treatment buries any vestige of a tune and gives the impression of day-glo mid-’80s synth-pop pastiche with nary a nod to irony, shoulder pads or poodle perms. The unrelenting reliance on vocal effects soon tires and sounds lumpen, dated and uninspired.

It’s not helped by lyrical stinkers such as opener Time Police, with its ‘haunting’ refrain that ”time police are coming – hide away evidence” yearning to be deep but coming across as meaningless po-faced piffle. The same song follows up with suggestions to ”loosen up your time in spatial continuum”. More lyrical beauties include “There’s a cross and a man of three composing types” (Signs Of Waking Up) and “My life has no GPS, I am lost” (Do It Myself). Really? Furthermore, mixing upper aNd LoWeR cAsE in your song titles doesn’t make you look/sound edgy if the music isn’t.

From song to song it drags on, with the odd variation in sequence of bleeps, insipid vocals and wispy gauze-like wafts of tune for the rest of the album. Cervux Sequential (yes, they do sing this title) tries to beef things up with a basic four-to-the-floor disco plod, with (hey!) ‘contemporary’ sub-bass whoomphs. Tell The Babes tries to ‘rock out’ but all instruments are filtered beyond recognition. No amount of ‘glitchy’ production tweaks can disguise the paucity of invention here. Or, more bluntly, you can’t polish a turd, however rich the ingredients.

Only on the mercifully instrumental Pakt do they keep it short and wordlessly to the point in a snapshot blast of interesting electronica. And Gzmo gives a trace of what could have been, as the electronics fall away to leave a skeleton of guitar melody and harmonic vocals to prove that humans were once involved in this, though too late to save it.

Do It Myself featuring Pharrell throws a bit of light relief from the insipid vocals with a reggae-tinged bounce that doesn’t go anywhere. The vague stab at humour Combat Disco Music (with sub-macho ‘hoo-has’) still comes across as po-faced vocodered clinical throwaway b-side material. It’s sad that these ‘background’ figures couldn’t produce something a little more unique and less gratingly derivative.

No-one expects bass player side projects to be interesting, so why should Guy’s be any different (apart from his being a bit of a high profile millionaire musician type person). He seems like a nice chap. Maybe he should stick to marathon running. (By the way, when playing live – which they do rarely – they dress in silver space suits with deer horns; unfortunately you can’t hear that on the album, which is a shame.)