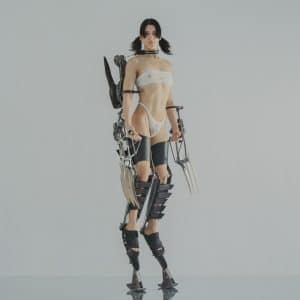 Arca albums have always been a thrilling listen: their shuddering bass, tortured synth tones and labyrinthine textures put the producer at the forefront of modern avant-garde, and over the years she has been developing her skills as a holistic performer as her identity becomes more directly relevant to the music. KiCk i is a display of prowess, melding the experimental, frequently abrasive production with copious singing and rapping from Arca herself, and in retrospect 2017’s self-titled record is best seen as a stepping stone towards this new approach.

Opening track Nonbinary dives straight in, with fiery lyrics over squelchy bass tones (“It’s not a ‘who do you think you’re dealing with’ / no, cause you’re not ‘dealing with’, there’s no deal / there’s just real, on my side”). The flow is intriguingly volatile, alternating between conversational speed and double-time with ease, and the track’s noisy second half is reminiscent of grime with its syncopated bangs and clacks. Another moment of sublime cacophony comes with Klk, featuring Rosalía, whose reggaeton rhythms underpin a shrill eight-note motif and constantly mutating sound design.

What both of these tracks have in common is their repurposing of mainstream sounds, sounds that are many miles away from Arca’s first two albums. The effect takes the listener into an uncanny valley of sorts, not least when the trap beats and R&B-style vocals of Machote are offset by distortion and dissonant metallic crashing sounds. It is no coincidence that SOPHIE appears on KiCk i – their artistic progressions mirror each other in many ways, and their collaboration La Chiqui is a match made in heaven. The bass bounces in manic fashion, the vocals are twisted beyond all recognition, and it manages the enviable feat of being intricate, visceral and goofy in equal measure.

Rip The Slit’s crushed, erratic percussion is the perfect soundbed for a pitch-bent, tongue-twisting hook (“I’ll hit you with that limp wrist, lipstick / slit lip, rip slit, it’s tit for tat / I’m lit up like a birthday candle”), while Watch featuring Shygirl is a cyberpunk banger of outrageous proportions. Calor strikes an elegiac tone with its shimmering piano notes, and Afterwards featuring Björk recreates the chemistry she and Arca had on Vulnicura and Utopia. One of Arca’s best qualities is her ability to give a song its unique sonic footprint while fitting it into a cohesive project.

Closing track No Queda Nada is an intriguing example of a trend that’s gained traction within experimental electronic music: ballad revivalism. It comes from a desire to salvage musical detritus (or what’s more commonly known as ‘cheese’), and from GFOTY’s charmingly off-key renditions of Celine Dion and Toni Braxton to the staid piano chords of Antwood’s Human it’s become something of a staple. Arca’s ballad ups the sincerity, a tender Spanish-language ode to her boyfriend Carlos, and as the synth bass oozes through its conventional sequence, spacious pads and glitchy downtempo beat on top, it builds to a beautiful, understated finish.

KiCk i is a relatively brief album, and its tracks arrive, make their impact and leave generally in quick succession. We have a bracing cocktail of styles and influences, many of them based in her South American roots, and an array of star guests who all bring welcome contributions to a singular artistic vision. Arca’s sound is evolving, transitioning into something that’s arguably more accessible, but still far from a conventional notion of ‘selling out’. The record dazzles with its detail, beguiles with its lyrical performances and leaves a lasting impression with powerful songwriting.

More on Arca
Arca – KiCk i