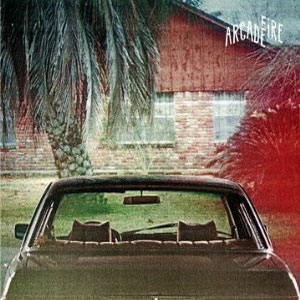 Arcade Fire have never been a band shy of tackling big themes. Their momentous debut album Funeral addressed death, somehow making it seem invigorating and inspiring, as well as tragic, epic and heartrending, while 2007’s Neon Bible melded religion and natural disasters (the tsunami, the New Orleans floods) in a portentous, unsettling blend of pomp and darkness.

At first glance, then, suburban life and all that it entails – the apparent “theme” this time round for third album The Suburbs – might rather pale in comparison. It’s worth keeping the faith, however: in Win and Régine Butler’s hands the suburbs themselves become resonant of much more than might initially be imagined.

The opening (title) track, on the surface a jaunty, perky pop song, serves remarkably well in laying out nearly all of the nuanced, often overlapping subjects of this complex, thoughtful and involving album. “In the suburbs I learned to drive,” it begins, continuing “grab your mother’s keys, we’re leaving”. Already these words conjure for the first time the sense of youthful impatience, malaise and urge to escape with which the album is permeated. The sentiment can be found again in Half Light I, with its dismissal of “these streets that we know too well”. Again, on Suburban War’s urgings to “jump the fence and leave it behind”, and the “kids on buses longing to be free” in Wasted Hours is that same echo of frustration at the restrictions of a childhood and adolescence in suburbia.

This is no rose-tinted, purely nostalgic looking-back, then. Butler maintains a level of dry-eyed realism in his reminiscences that sometimes comes over as the cynicism of a “been there, done that” fully formed adult, slightly embarrassed at the memory of his younger self. The pervading impression is of a disillusioned or reformed idealist, with City With No Children providing the key couplet “Never trust a millionaire quoting the sermon on the mount / I used to think I was not like them / I’m beginning to have my doubts”. Many other references to youthful naivety, like kids “using great big words that they don’t understand” (Rococo) or to the contrast in ideals of adults vs kids or modern kids vs old-time kids are included.

But at other times a more positive, romantic nostalgia emerges. In City With No Children, remembering a summer from his past, Butler sings wistfully of how “I could have loved you then / Before our age was through”. Sprawl I (Flatlands) is based around a nostalgic, if ultimately depressing revisiting of the places “where we used to stay”. Other tracks, like Half Light I, simply sound nostalgic, in the yearning strings and beauty of the vocals.

The motivation behind all this raking over of the past, though, emerges from the very first track. In The Suburbs, Butler tells us “I want a daughter while I’m still young”. From this moment on we glean references not just to childhood in the abstract, or in the sense of that experienced by the songwriter himself, but also in settling-down-and-having-children terms. The clock that “keeps ticking” in Modern Man could quite possibly be a biological one, while even the titles of Empty Room and City With No Children demonstrate a yearning for progeny. Cast in this light all the re-evaluation and analysing of their own upbringings, the places they lived and the attitude of children and adolescents then and now seem less like a fruitless dwelling on things that are over and done with, and more like a touching attempt to set records straight and learn lessons from the past, with eyes firmly fixed on the future. Here, perhaps, is the key to why this album is such an emotive and emotionally satisfying piece of work, in all its complexity.

Musically, there are thankfully fewer of the excessive Springsteen-isms of Neon Bible. The surprise musical reference this time, twice used to great effect, is Abba. On the Régine-fronted Empty Room and most of all on the quite superlative (euphoric, gorgeous, playful) Sprawl II (Mountains Be…)) the similarity is striking and all the more wonderful for being totally unexpected. Elsewhere a Krautrock motorik beat (appropriate for a band who pepper their work with references to cars and driving) prevails on tracks like Half Light I and Month Of May, the latter one of only a couple of tracks that are anything less than riveting (the other being the repetitive Rococo).

To the doubters then, concerned after Neon Bible that the band had perhaps lost their early magnificence, this is a swift, elegant, engrossing and totally admirable rejoinder. One of the 21st century’s most intelligent and satisfying bands (musically, lyrically, emotionally) have once again set out their stall, and once again produced a work of inspired resonance, capturing truth after truth, in all its muddled, human realism.