by John Murphy
published: 11 May 2018 in Album Reviews
Tweet 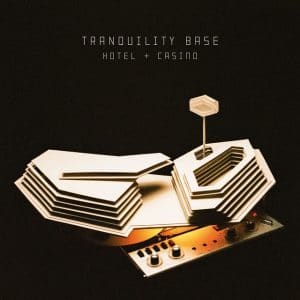 Now then, mardy bum. It’s fair to say that they’ll be more than a few people ‘with the face on’ once they hear Arctic Monkeys‘ sixth album. It’s been over a decade since their debut, and while it would have been pretty easy to build a career on singing about Hendersons Relish and nights out at the Leadmill, this is a band who has always taken the road less easily navigated.

Whether it be sending a video of the band dressed up as characters from The Wizard Of Oz to the Brit Awards or becoming Josh Homme’s best friends and making an album of sludgy desert rock, Alex Turner and company have always specialised in the unexpected. Yet it’s fair to say that nobody saw coming Tranquility Base Hotel & Casino, a concept album in which Sheffield’s favourite sons recast themselves as a lounge act playing on the moon.

There are no lead singles to be taken from the album, for the very good reason that no song on here sounds remotely like a single. All the tracks are based around strings and synths, there’s not much room for Jamie Cook’s incendiary guitar riffs, nor Matt Helders’ pyrotechnic drumming, and there are barely any catchy choruses to be heard. While it’s not exactly inaccessible, it’s a fair bet that not many people would expect the band to turn their hand to what can only be described as ‘space-age lounge jazz’ at this stage in their career.

Once you’re used to the new sound though, there’s much to enjoy about Tranquility Base Hotel & Casino. Some of the arrangements are gorgeously lush, and Turner is on his most quotable form. “I just wanted to be one of The Strokes, now look at the mess you made me make” runs the opening line of the album, and he’s off and running from there. In a similar way to Father John Misty (and much of this album recalls his rather bloated Pure Comedy record), you’re unsure whether Turner is playing a character, taking the piss or just going slowly mad.

At one point he declares that he’s “dancing in my underpants…going to run for government” in One Point Perspective, then he’s beseeching someone in the title track to “kiss me underneath the moon’s sideboob” before dolefully concluding in She Looks Like Fun that “I’m so full of shite, I need to spend less time stood around in bars waffling on to strangers all about martial arts”. When it works, as in the excellent Four Out Of Five (the one song you could accurately describe as ‘old Arctics’) or on the swooning closing track The Ultracheese, it works beautifully, and he even finds time to beautifully describe Donald Trump in Golden Trunks (“The leader of the free world reminds you of a wrestler wearing tight golden trunks, he’s got himself a theme tune, they play it for him as he makes his way to the ring”).

The problem is that too much of Tranquility Base Hotel & Casino meanders around rather inconsequentially. The World’s First Ever Monster Truck Front Flip has a terrific title but not much else to remember it by, while Batphone suffers from a lack of memorable melody, leaving the impression that Turner’s just rambling on to himself.

In fact, it’s Turner’s delivery that’s both the album’s strongest and weakest points: at his best, he can be very funny, very arch and sometimes reminiscent of David Bowie‘s Cracked Actor. At other times, the mid-Atlantic drawl starts to grate a bit and, as with most things delivered with a heavy slab of irony, you begin to yearn for some sincerity – or at least, a glimpse of the man who could break hearts in a song like 505 or write a mini-story like When The Sun Goes Down.

However, bands who change and evolve are usually the ones with the longest careers. It would have been very easy to pass off Tranquility Base Hotel & Casino as an Alex Turner solo project, but there’s something to be admired in the band’s sheer bloody-mindedness and gumption in changing direction so radically. When the Arctic Monkeys’ career comes to be reappraised, this album could be seen as an outlier, or the start of their next phase. It won’t be to everyone’s taste, but sometimes, dividing an audience is exactly what you need to do.