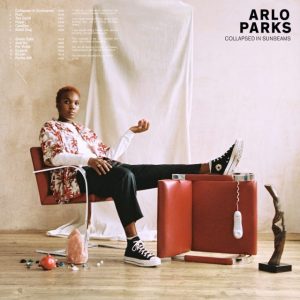 Arlo Parks is the nom de plume of Anaïs Oluwatoyin Estelle Marinho, an artist and poet from Hammersmith, who was longlisted as a breakthrough artist in the BBC Sound Of 2020 after uploading demos to BBC Introducing and garnering the attention of Radio 1 DJ Jess Izatt. Her debut single Cola landed in November 2018, followed by the EP Super Sad Generation, which was the perfect marriage of accomplished creative writing and low-key hip hop. Her second EP Sophie showcased a more neo soul sound with instantly engaging narratives.

In May 2020, Parks released the song Black Dog and this was to become one of the most devastatingly relatable songs of the year, its treatment of depression and anxiety resonating deeply with everyone at the height of Lockdown 1.0, and highlighting perfectly the compassion and urgency felt when trying to lift someone above their decaying mental state. It was promoted to Radio 1’s A List in July, and thus enjoyed some mainstream success.

Collapsed In Sunbeams is Parks’s debut album and is a set of songs that could easily form a self-help playlist for everyone suffering at the hands of coronavirus and lockdown. This is, however, a self-professed “first big cohesive statement of intent” dealing with the experiences and people surrounding her adolescence, co-written and produced with Gianluca Buccellati. The album opens gently with a spoken word poem, with the line “You shouldn’t be afraid to cry in front of me” suggesting that what will unfold is rather personal and will resonate.

Hurt is an uplifting jazzy number with its drum-laden backdrop for the narrative of pain and suffering being temporary. This is explored further on Hope with its mournful guitars and soothing piano and Parks’s gentle and hazy vocals reminding that “You’re not alone, like you think you are, we all have scars, I know it’s hard.” Too Good has a wonderfully summery hip-hop vibe that recalls the funkiness of En Vogue‘s My Lovin’ with a curious, yet wonderful nod to Rod Stewart‘s Baby Jane in the chorus, and Just Go is a slick slice of defiant R&B pop.

Caroline showcases Parks’s knack for vignette storytelling, both clever and visceral. Majestic lines like “Strawberry cheeks flushed with defeated rage, then he spills his coffee as he frantically explained” are entwined in this beautiful downtempo number exploring the stark unravelling of an argument between a couple and is buttressed by its bittersweet and mellow soulful sound, evoking Emilíana Torrini at her best. Eugene explores unrequited love over a Taco Bell and a gorgeous breakbeat sound and Green Eyes is a wonderfully poignant love story with an LGBT+ lean and some devastating lyrics like “Could not hold my hand in public, felt their eyes judging”, with gentle and heartfelt vocals adding further emotional heft.

Most of the sound on the album treads an endearing old-school hip-hop feel that will have everyone clamouring for the hazy and fun-filled summers of yore, yet there are a couple of departures in the electronica-lite Bluish and the dark and sensual For Violet. The album closes with the elevating Portra 400 which ties the album nicely together with the lyric “making rainbows out of something painful”. This is exactly what Parks has achieved with her spellbinding debut album, its vivid subject matter dealing with depression, sexuality, prejudice and matters of the heart with an uplifting old-school feel complemented by celestial vocals. Long may these sunbeams and rainbows bless the sky.