Arthur Russell – Love Is Overtaking Me 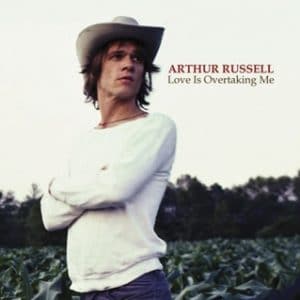 Was there nothing Arthur Russell couldn’t turn his hand to? Not content with his status as a leading disco light, a composer influenced by Indian classical music, or a cellist, his talent as a singer / songwriter is now brought to light in this glorious collection of private tapes.

It proves something of a revelation. Recorded in intimate surrounds, often the multi-instrumentalist’s house or bedroom, the tapes reveal an intensely personal voice that at times is on a par with Nick Drake in the intimacy of its delivery. Often with little more than guitar or soft drums for company, the songs practically revoke his disco sound and concentrate instead on softly sung asides, feelings and stories, all given in a conversational style.

When Russell tells the story of a preacher forsaking his partner for the Lord in the bluesy What It’s Like, the listener hangs on his every word. When he’s trying to make himself heard in Eli, the cello provides a moving counter melody. And when cello, clarinet and flute all combine in the blissful song Goodbye Old Paint, all the cares of the world slip dreamily away.

If indulging in some loose pigeon-holing, this record might end up in the folk section – but that would discount its occasional nods to country, ’80s pop and just occasionally the barest glimpse of Russell’s first discipline, disco. That indicates the range of these songs, which run from the early 1970s right up to 1991 and his very last home recordings. Those are found out through more up to date technology, but that never dominates, as Russell’s primary instrument is his voice.

The sighing delivery of Hey How Does Everybody Know finds him at his wistful best, while the softly evocative Letter finds the exquisite dilemma that accompanies a curious looking sealed document addressed to a loved one. Meanwhile the lyric from I Couldn’t Say It To Your Face, “that I won’t be around any more” acquires extra poignancy, given Russell’s absence from us for close on twenty years now.

In each of the 21 songs there is something to draw from, an instrumental colour to enjoy or a sentiment with which to relate. What’s incredible is the strength in depth of the Russell archive, which shows no sign of running dry. With gems like this only just unearthed, who knows what else could be waiting?