by Helen Clarke
published: 5 May 2017 in Album Reviews
Tweet 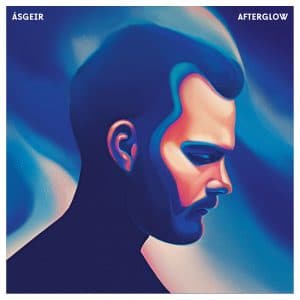 Stop everything and listen to the title track to Ásgeir‘s new, second album now. Has there been a better opening track to an album this year? It’s phenomenal. He nails this wonderful, rare trick of completely transforming a song with a single word. It’s the way Joe Strummer sang the word ‘lovely’ on Safe European Home, or Amy Winehouse breathed a helpless ‘black’ towards the end of Back To Black; the way he sings the word ‘afterglow’ is absolutely devastating. It flips the song on its head, injecting it with a sort of mythical, other worldly quality that haunts the rest of the album, laying his cards on the table from the very beginning.

The entire record is startling for its shift in sound and feel: no longer is the 24-year-old Icelandic singer/songwriter a folkish type whispering over a soft electro track. Afterglow sounds like Bon Iver and Anohni were forced to join Hot Chip. It feels like a satisfyingly natural progression, but brave all the same. Because his first album was a big deal.

In The Silence (the English title of the album – the original Icelandic title literally translates as the fantastically morbid Glory In The Silence Of Death) was something of a phenomenon in his native Iceland. In fact, it sold so well that a mind boggling one in 10 Icelanders own a copy of it. (This ‘fact’ was tested by Dermot O’Leary on his Radio 2 show last year, when he phoned someone at random from Iceland’s phone book and, yes, she’d bought it.) So there was a natural reluctance – dare the nation’s sweetheart risk being accused of selling out? – when he handed it over to Reykjavik resident John Grant to translate into English and then re-recorded the whole collection for international release. But it paid off, allowing him the luxury of a little diversion in sound.

It still feels quintessentially Icelandic. In his This Music Made Me feature, which he wrote for musicOMH earlier this year, he cited Sigur Rós‘ Ágætis Byrjun as one of his favourite albums, and recalled listening to it in Sweden: “It made me feel better when I was feeling homesick and just wanted to be home – this album took me a little closer to home,” and this sense of creating a sound that paints aural pictures of home is something he’s clearly absorbed into his own work. In fact, he takes this so far that he’s again turned to his dad, poet Eianr Georg Einarsson, for the record’s lyrics, and his brother Thorsteinn is among the collaborators to pitch in too.

He specialises in huge, atmospheric sounds, images of desolate landscapes punctured with glimmers of light. Afterglow switches between being at times minimal, with an almost monastic sound (best represented by Fennir Yfir, which descends into a repetitive, trance-like chant) to the funk and falsetto of Stardust, which is crammed full of beats and electro chirps. At times you feel it could do with more of the latter, as some of the tracks plod along, verging on background noise, but when he gets it right, he gets it very right, and if the record lost some of the dead weight, making it around seven or eight tracks long, it’d be seamless.

It’s the moodiest of records; it could drag you down or pull you up. Afterglow could almost be two albums, but then its creator could almost be two people. On the one hand the melancholic, quiet, unassuming sounds of a young man from a tiny Icelandic town with a population of 40; on the other a technically fascinating, confident electro splurge from an international musician with sold-out shows as far and wide as the Sydney Opera House and the Shepherd’s Bush Empire. It’s this that makes Ásgeir a fascinating and worthy star.