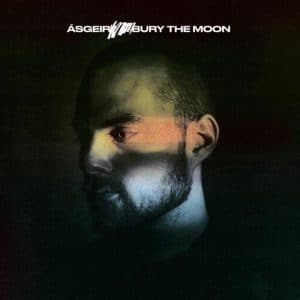 It’s now eight years since Icelander Ásgeir Trausti Einarsson’s album Dýrð í dauðaþögn became the fastest ever selling debut album in his homeland, yes even pipping Björk and Sigur Rós to the post. The album was then translated into English with able assistance from John Grant and titled Into The Silence for added international heft. Second album Afterglow was a brave, yet fascinating departure from the acoustic folk with added electronica and beats.

Ásgeir’s third album Bury The Moon, or Sátt for its Icelandic title, is more of a return to the folky and atmospheric sonic blueprint of his debut. Born out of a need to escape to the Icelandic countryside following the disintegration of a relationship, Ásgeir holed himself up in a summer house in the winter with his guitar, a small keyboard and minimal recording equipment. The results are deep, authentic and emotionally introspective.

The album opens with Pictures, its strumming evoking – of all things – Sheryl Crow‘s Redemption Day, and the melancholy builds gradually into brighter chorus sections with warmer brass creeping in towards the end. Youth, written with his father, the poet Einar Georg Einarsson, explores clinging onto childhood innocence in this dark and troubling world against a backdrop of plucking guitars, as horns gear us towards the finale. The touchingly haunting Eventide will bring a tear to perhaps even the most cynical of eyes with its stark reality of grief and loss, and the beautiful atmospheric electronica of Breathe is layered over a soft and ethereal drum beat while romantically exploring holding on tight no matter how rough the seas get.

Being immersed in nature weaves into the album on the soulful Living Water, an ode to Iceland’s natural resources and an urgency to preserve them. Similarly, the more antagonistic Lazy Giants treads the narrative of Tori Amos‘ Up The Creek with an accompanying music video seeing Ásgeir strum a guitar while blind capitalist greed is leading to artefacts and nature crumbling behind him.

The album’s standout is the orchestral and cinematic Rattled Snow. Electronic pulses are urged on by a thumping drum beat underpinned by celestial strings. Ásgeir’s trademark haunting, yet uplifting vocal is here in spades. He may not be able to see the outline of the hills for the snow, but is still optimistic silently waiting for Spring and hopeful and happier times.

At the album’s heart beats a narrative of emotional torment, yet not only on a personal level. Bury The Moon showcases the healing and enveloping power of nature, yet also hones in on the simple and absolute necessity of its existence. This dystopia we are in will wreak more havoc with its conceited leaders and rapacious lawmakers all too hasty in their dangerous disregard of climate change. It’s a harsh reality, but one we must face.

The album closes with the bittersweet and jagged title track recalling Naughty Boy featuring Beyoncé‘s Runnin’ (Lose It All) depicting someone who has literally moved Heaven and Earth for their lover, the dawn then breaking on the realisation that even this will never be enough.

Ásgeir has returned with an ambiently powerful and a brilliantly immersive album. Unlike his One Little Indian labelmate Björk, we should not be puzzled by these emotional landscapes, but rather beguiled and entranced.