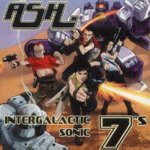 As career retrospectives go, this one stands out like a lighthouse in a stormy night.

First off, the band’s main songwriter was only born 25 years ago. Then there’s the inescapable fact that just about every one of the nineteen tracks on the record have been singles. And several of those have been top 10 singles. And they’re just about all bloody fantastic, stellar, stargazing, exuberant pop-rock gems.

From the opening incendiary notes of Burn Baby Burn through early crowd-delighter Girl From Mars, the recent show of brilliance that is Shining Light to the under-rated Petrol, Wheeler’s talent for radio-friendly, three-minute pop offerings is unsurpassed. The lyrics are those of a young mind, the energy is that of a young soul – and the overall effect of this record is to invigorate, energise and please.

New one-off single Envy rather pales compared to tracks from recent album Free All Angels, especially Burn Baby Burn and Shining Light – but it must also contend with the orchestral swoops of Oh Yeah and the Walker Brothers‘ sample-driven Candy, an ode to Jackie Chan in Kung Fu and the scrumptious Goldfinger. Compared to the output of most of their contemporaries, it’s still a rabble-rouser.

And even if you have the first three Ash albums, there’s a reason to get hold of this 19-track monster – a bonus CD of B-sides tracks. And there are no fewer than 22 of those to choose from. True, there’s not a vast variation here – most are quintessential festival fodder, manic guitars backing Wheeler’s optimistic, romantic voice. The sheer amount of material assembled here only backs up suppositions that Ash are a great deal more than Britpop survivors – even if Wheeler was one of 1996’s cover stars. And it’ll keep you listening for ages.

If you didn’t already know, Intergalactic Sonic 7″s will confirm two things for you. First off, Ash are a damned fine band. And Tim Wheeler is sickeningly talented. If he can keep this sort of songwriting up then the annals of music history beckon him to join the greats.