by Graeme Marsh
published: 18 May 2018 in Album Reviews
Tweet 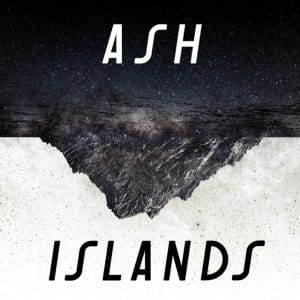 Returning to their old label Infectious for their seventh full studio album, Irish rockers Ash have followed up 2015’s Kablammo! with a slight shift. Whilst its predecessor drew its blood from the usual power-pop-punk vein they’ve been associated with since their 1992 formation, additionally reinforced by its exclamation mark, Islands takes the foot off the gas a little.

Frontman Tim Wheeler drew inspiration for the new record from a recent relationship break-up, a particularly painful one, and so, as is the case so often when songwriters are faced with traumatic situations, the songs not so much flowed but gushed out. The result is less of an immediate adrenaline rush like they’ve often put forward in the past.

Taking its name from the island hopping Wheeler indulged in as he went from Japan to Ireland to Spain to Manhattan during the aftermath of his relationship fallout, Islands opens with True Story. Still retaining Ash’s hugely melodic core, the song paints a picture of a typical post break-up scenario, explaining that there are of course always two sides to any story in a blame-apportioning stance; compared to stereotypical Ash, this feels a little tempered but is none the worse for it.

Annabel and Buzzkill, both early singles, follow. The former is more reminiscent of standard Ash sounds as Wheeler tells of stormy times beneath a catchy shell; the latter is a song he wrote for a laugh, an attempt to make his friends laugh, but one which had them saying this was really good. To boot, it even has a couple of The Undertones members on backing vocals – Damien O’Neill and Mickey Bradley – after Wheeler met them at an Alzheimer’s charity gig, realising that they would be a perfect fit for the song. Perhaps, though, the excessive expletives used within seem misplaced coming from a band that’s no longer full of teenage angst.

A number of decent cuts follow, from the slower, bittersweet anti-love central pairing of All That I Have Left and Don’t Need Your Love to the inoffensive Silver Suit, whilst Is It True? benefits from another catchy chorus. Closer Incoming Waves also impresses, its gentle beginnings giving way to a gradual crescendo of shimmering noise and bursts of guitar for the perfect departing note.

Best of all, though, are a couple of slight detours for the band. Firstly, Confessions In The Pool pins down an underlying broodiness like a James backing track for its verses where bubbling synths tinkle before a super-catchy chorus; conversely dark lyrics like “what could we have done to deserve this” contrast against the sugary melodies beautifully. The album’s twin peak belongs to Did Your Love Burn Out?, a number penned straight from the heart and it’s a cracker, moving from something akin to a sugar-coated stoner rock classic to something lighter before an awesome guitar solo kicks in that could have come straight out of the ’70s.

Whilst most Ash fans probably sit in the ‘I need my adrenaline rush now and I don’t want to wait for it’ camp, Islands will take a little longer to hit the spot. When it does though, it could well challenge some of their best efforts, even if their diehard fans fail to agree on first listen.