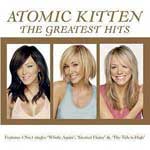 Whether Atomic Kitten have split up for good or are, as their record company puts it, “taking a break”, is not especially significant in the scale of things. Clearly, however, it is reason enough to put out this “best of” set just in time for the Easter holidays. That and, perhaps more to the point, ex-Kitten Kerry McFadden’s recent jungle exploits. Well if Johnny Rotten can sell a few Sex Pistols CDs on the back of his rainforest tantrums, why not Kerry?

When they were first launched in 1999 it seemed pretty obvious that the Kitten were being marketed as filling that space in the marketplace fast being vacated by the Spice Girls, an impression reinforced over the years by such Spice-lite tracks as It’s OK, If You Come To Me and Love Doesn’t Have to Hurt.

The girls’ down-to-earth personalities and Scouse impatience with music biz hype proved rather more endearing than the newly toned, bleached and airbrushed Spices, and they have earned every moment of their success.

Perhaps realistic enough to realise that their time has now passed the tracks included here suggest that the Kittens deserve rather more than just a footnote in pop history. Sales, to date, of more than 5.2 million singles and 3 million albums surely tell their own story.

There are certainly plenty of likeable tracks here – Right Now 2004 is an updated version of the raunchy early hit, Cradle (a big hit in Japan apparently) is a rare excursion into pure unadulterated schmaltz, and (one for the dads) isn’t Be With You just a little reminiscent of Day By Day from Godspell? Then there’s the infectious helium-vocals of I Want Your Love (complete with “The Big Country” sample) and fan favourite You Are.

The girls have also proved pretty astute in the their choice of covers, The Tide Is High was ubiquitous on the radio waves during the late summer of 2002, a gentle makeover reinvention of The Bangles‘ Eternal Flame proved equally bankable, while Ladies Night, recorded with Kool And The Gang, is a playful slab of retro-disco.

So there you have it, five years of hits and a gang of girls who helped enliven a pretty torpid era in pop history.