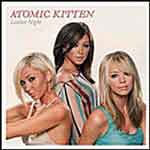 Atomic Kitten’s latest album is named after the Kool & The Gang song which heads up the track listing – perhaps a pointer to the level of originality on offer here?

That said, Ladies Night is easily the best track on the album, with a depth of sound (saxophone, trumpet and trombone all feature) unmatched elsewhere. The Kittens have even gone to the trouble of getting Kool, plus Gang, to take part in the ’70s funk-fest.

Be With You is another good track – and another song that is not from the usual stable of Kitten’s songwriters. This continues the ’70s disco theme and, like Ladies Night, can be expected to feature heavily in certain nightclubs’ playlists.

The next track is co-written by Jenny and her DJ boyfriend, and provides a sophisticated sound while at the same time forming a bridge to the rest of album, which resorts to classic Kittens with the latest single If You Come To Me.

For the rest of the album, despite the variety of songwriters (Jenny, Tash and Lil all have a go, as does Gary Barlow and other high-profile writers), there is a certain uniformity. This seems almost wholly due to the dreadful drum machine that appears on practically every number. No matter how soulfully the girls sing, you feel that the insistently chirpy beat will go on regardless to keep them in line, with all the depth of feeling of a metronome.

Which is a shame. Some of the songs, notably Don’t Let Me Down (another Jenny co-write) and Don’t You Know, sound like they could be really strong if they only had a live band to rise above the two-dimensional pop beat. And when they do break free, as in Lil’s simple and beautiful piano ballad Someone Like Me, the song only lasts for two minutes dead.

There are a clutch more songs which are, nonetheless, likely to make the pre-teen fans happy because they keep to the “usual style”. These include Tash’s I Won’t Be There and Lil’s Never Got Over You (a Christmas Number One ballad contender, perhaps?).

Overall, it seems like the girls are trying to establish their personalities and maybe their own musical tastes. This may be a pre-cursor to solo careers but, at the moment, creativity and originality is being stifled out by their puppet-masters.