Aurora – All My Demons Greeting Me As A Friend 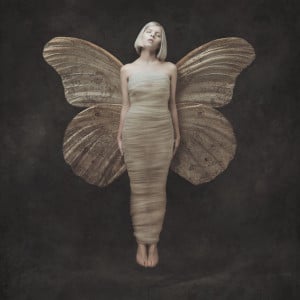 Cast your mind back a few years, and you may remember a time when John Lewis didn’t officially own Christmas. Those days are long gone now, and every year the beginning of the festive season is marked by people sat at their laptops, tears streaming down their face while the heartwarming story of a child doing something nice for an older person, or an animal being cute or something, is soundtracked by a breathy, minor-key cover version of a much loved classic song.

This year’s advert featured the delicate tones of Norwegian teenager Aurora Aksnes, who sang Half The World Away by Oasis while an old man living on the Moon spied on a little girl through a telescope (it’s less creepy than it sounds, kind of). It was nice enough if a bit insipid, in the way that these kind of things are, but it doesn’t really represent Aurora’s music.

Debut album All My Demons Greeting Me As A Friend is instead a far more suitable introduction to Aurora (in fact, Half The World Away is conspicuous by its absence). Her songs are a beguiling mix of sizzling synth-pop, and for want of a better phrase, Nordic-folk. There’s a touch of Susanne Sundfør to songs like Murder Song (5,4,3,2,1) – albeit without that dizzying ambition which coats all of Sundfør’s songs – and that peculiarly Scandinavian sense of melancholy is draped over even the most upbeat of tracks.

There are two modes to Aurora: the wistful folkie side, and the pop banger queen. Both are well represented on All My Demons, but it’s the latter that comes out on top. Conqueror is a terrific slice of uproarious synth-pop, while Running With The Wolves has a haunting, instantly likable chorus that will bop around your brain for days to come.

The other end of the spectrum is represented by Through The Eyes Of A Child, an icily atmospheric ballad (which, come to think of it, would have made a much better John Lewis song), or the opening Runaway. Sometimes, as on the aforementioned Murder Song, she combines both sides of her sound, which opens with some stately piano chords and ends as if a mirrorball’s about to be launched through the speakers.

There’s also a dark edge to many of the tracks: Murder Song is pretty self-explanatory, but there’s a recurring motif about drowning and death on songs like Under The Water and Black Water Lillies. Then there’s the chilly, almost robotic Home which sees a multi-tracked Aurora singing “we are not alive, we are surviving every time”. It never seems overtly miserable though, especially with songs like the uplifting Warrior, on a par with Katy Perry‘s Roar as one of the great empowering pop songs of recent times.

Some may find Aurora’s overtly mannered and sometimes child-like – the fact that her closest vocal comparison is probably Ellie Goulding shows how divisive some may find her. Yet it’s perfectly suited to these songs, and she does an excellent job of drawing you into her strange, sometimes rather unsettling world. It’s a world which demonstrates that there’s much more to her than a rather drab Oasis cover. Don’t let the old man with the telescope put you off discovering Aurora.