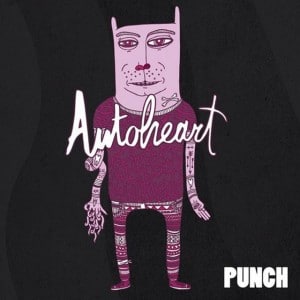 Scroll down for full album stream

To understand what Autoheart‘s debut album sounds like, think of a team languishing somewhere in the middle to lower echelons of the football league. A solid, professional team, with some starry-eyed juniors, old premier-leaguers going for their coaching badges, and jaded journeymen who never quite made the top grade. Then, in the middle of them, sit Manchester United’s 1999 treble-winning midfield quartet, at the peak of their all-conquering powers.

For between a pleasant opening batch of tunes and an equally moderate back four, there lie four songs of such utter brilliance, they put all those in front and behind in the shade. It’s easy to pick out Lent as a highlight; it’s catchy and it rollicks along in a synth-pop polka groove a fair few beats more lively than the tracks before. But there’s more to it than that – it’s that for the first time on the album, five tracks in, one of the backing instruments finally gets to play something you can hum. Before that synth hook, they all strum and pluck and plink and plonk, but rarely stamp any kind of identity on the song.

Moscow, the second song of real quality, keeps up the pace with a little bit of George Michael‘s Faith, a Bo Diddley riff or two, and a lot of Dexys. Then they go all Adele on us with piano ballad The Sailor Song, in which dextrous vocalist Jody Gadsden’s occasional tendency to imitate Antony Hegarty becomes most apparent. But it doesn’t spoil what is a truly affecting song with a melody that rises in effortless curves like vultures in an updraft. And lastly, Hungover In The City Of Dust brings the quartet to a close in the most downbeat manner imaginable – but the final crescendo, though one of several on the album, packs a real emotional punch.

Debut albums are often beasts with long gestation periods, over which time the chief creative partners in the project can fall in love, have their hearts broken, their legs broken, heal them both, vote Labour in the by-election and Tory at the general, and so forth. But this idiosyncrasy often results in a more genuine, human emotional statement than the constricting single themes of hurriedly-written later works, and Punch is no exception. Even just within that fantastic foursome, there’s room for any mood.

Moscow is gleefully in love (“Let’s get a dog, an Irish red setter, it’s all we need to get better”) where Lent is gleefully out of it, counselling those stuck in unhealthy relationships to “take a break, pack it in, take it out to the bin”. There’s a joyous, giddy quality in these rhymes; the kind of lyric Robbie Williams might write if you stuck a pin in his ego. But The Sailor Song’s take on the relationship’s final curtain is, despite the possible innuendo, more resigned than anything else – “I never really had it in me, did I?” – and Hungover In The City Dust takes the mood down even further into the desert of real, despairing, missed-the-Champions-League-final-through-suspension desolation.

The rest of the album doesn’t quite live up to that promise. January’s melody swoops elegantly in and out of falsetto like Everything Everything after their ritalin kicks in, but doesn’t stick in the mind long after. Opener Anniversary nearly cancels out all its good qualities by aping Coldplay‘s Viva La Vida in its introduction, and Santa Fe comes puzzlingly close to being a downbeat The Killers‘ Mr Brightside cover. Yet all they need to do is put a little more love and attention into each and every song, as much as those four in the middle, and the next album can’t be anything less than a knockout.