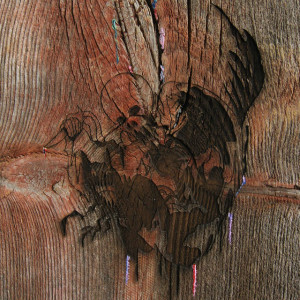 You might know Avey Tare aka David Portner from Animal Collective (hint: he’s not Panda Bear, Deakin or Geologist). He writes a pretty significant number of that band’s songs – eight on their last record, Centipede Hz, for example. For Slasher Flicks, he’s hooked up with former Dirty Projectors bassist/keyboardist Angel Deradoorian, and ex-Ponytail drummer Jeremy Hyman.

Let’s get this out of the way – these guys aren’t Pop. 1280 or Soft Metals, who take direct influence from horror soundtracks. The name is sort of a red herring. The amount of horror movie soundtrack influence you can hear over these 11 tracks will depend on what movies you’ve been watching and what drugs you were taking when you watched them.

The album opens with A Sender, where bubbling analogue synth sounds lead into a schizoid-pop cut, where a jolting drumbeat and heavily processed vocals sit side-by-side with ambulance-siren guitar sounds. Duplex Trip, which follows, is a bit of an ordeal to listen to through headphones – it’s mixed so hot that there’s no dynamic range and your ears can’t really rest (this is a big problem with the some tracks on the record). Tare’s vocals take on a Billy Corgan-ish whine, and the random, spastic, drumming thrusts the track forwards.

That It Won’t Grow is one of the better numbers here – probably because it’s not annihilating your eardrums, just affectionately punching them. The piercing guitar and fizzing cymbals are almost a pleasure – but the creepy processed vocals are, well, creepy.

Roses On The Window is the best track on the record, hands down. The drumbeat is exceptional, the bass groove positively massive. It sounds like Screamadelica-era Primal Scream or blissful Black Dice. It sounds like robot dub. You will wish the whole album was like it. Modern Days E, which follows, is another winner. It rolls and rocks and blasts away – only playfully this time.

Strange Colores is a another LOUD one, but there’s an undeniable groove about it, while Your Card closes the record with a final hefty dollop of kinetic power, with a galloping rhythm riding towards a ringing, chiming outro.

While the album as a whole improves as it goes on, overall it leaves the listener wanting less of some things, more of others (if you’re a fan of Black Dice, get this immediately). The music here is twitchy, neurotic, wired – it quite literally bludgeons the listener with excess sonic information. It’s also VERY LOUD! There’s so much going on at any one time that it becomes impossible to get locked into one groove or melody for too long.

If Portner intended for this to be an extreme record, and there’s every chance he did, then it is a fine piece of work. If he intended for it to become more than a footnote, he hasn’t quite hit the same heights as one of his bandmates.

It’s not often that a side project is better than the work of the main band but away from the Animal Collective, Panda Bear has thrived. Not only has he been able to make records of comparable quality to Animal Collective, his most recent works have gone one better (see: the incredible Tomboy vs. the underwhelming Centipede Hz). A largely entertaining but occasionally baffling listen, Enter The Slasher House sadly falls just short of Animal Collective’s best work and Panda Bear’s stunning solo projects. On this showing it’s probably better to focus on the day job, Dave. Or hire a producer.