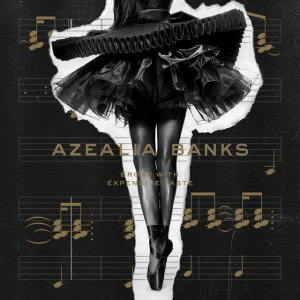 It may not be up there with Chinese Democracy or My Bloody Valentine‘s MBV in the pantheon of legendarily long-delayed albums, but there did seem to be a point where we’d never actually hear Azealia Banks‘ debut album.

There were rows with Lily Allen, TI, Lil’ Kim and Lady Gaga as well as accusations of homophobia during a row with showbiz blogger Perez Hilton. And with every official delay of Broke With Expensive Taste, it seems as it Lily’s parting tweet of “I’ve had 2 kids since 212 dropped and i bet my my album still comes out 1st” would seem prophetic. As it turns out, Lily’s album was released first, but at first listen it certainly seems that Banks’ album could have the more long-term appeal.

For Broke With Expensive Taste, suddenly released without any notice to online retailers on 6 November, is an album crammed with ideas. It may lack focus, it may threaten to veer wildly off course at times, and it sometimes can be a frustrating listen. Yet when Banks is on form – and, do not fear, she often hits top form on this debut – she sounds like the most incendiary, exciting pop star on earth.

It’s also a lot less brash and abrasive than you may think – Banks has a surprisingly sweet and soulful singing voice, put to good use on opening track Idle Delilah and the terrific JFK (described by Banks on Twitter as being “a certain pop star who likes to steal my ideas and pretend they were her own”, so take your own guess there), and she has a great ear for a catchy chorus, as demonstrated on one of the album’s best tracks, Chasing Time, which could easily give Rudimental or Disclosure a run for their money when it comes to quality dance-pop.

She still knows how to spit some quickfire raps though, and Broke With Expensive Taste’s most thrilling moments happen when Banks lets rip. 212, despite being three years old now, still sounds as fresh and exciting as it did first time round, while Heavy Metal And Reflective is, if played at a certain volume, absolutely terrifying – full of relentlessly dark industrial basslines underneath Banks’ impressive flow. It may not be “the loveliest thing I’ve ever heard” as she states in the song, but it certainly grabs the attention. Even Yung Rapunxel, which sounded somewhat lacklustre when released as a single last year, sounds much more at home in the context of an album.

Broke With Expensive Taste is, most of all, an album full of ideas – Gimme A Chance samples the chorus from Enon‘s Knock That Door to terrific effect, features an effervescent brass chorus and, for no particular reason, Banks raps and sings the last half of the song entirely in Spanish. You’ve no idea where it’s all going, but you can’t tear yourself away. Desparado employs MJ Cole to drop some ghostly backbeats and muted trumpet, while Ice Princess manages to be both sinisterly menacing and gloriously uplifting.

As great as all this is, it’s fair to say that not everything works. The album’s a bit too long to be truly effective – both Soda and Luxury don’t really possess anything particularly startling about them, and come across as rather formulaic, while the Ariel Pink collaboration Nude Beach A Go-Go just sounds totally and utterly out of place: a Beach Boys parody that sounds like a Janelle Monáe out-take. It’s not that it’s particularly bad, it just sounds completely jarring when surrounded by the dark, inventive tracks on Broke With Expensive Taste. It may well make more sense on Pink’s own album Pom Pom, where it also features.

Given the long gestation period, it could be said that Banks’ debut doesn’t quite live up to the hype. What it certainly does do though, is prove that there’s an awful lot of talent beneath the self-generated controversy. It may well wander all over the place and sound in need of a firm guiding hand at times, but it also contains some genuinely inventive and thrilling pop music. And now the debut album is finally out of the way, where she goes to next should be a hell of a ride.