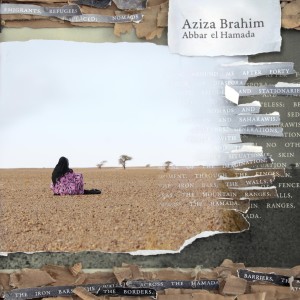 The Western Sahara, a sliver of land rather bigger than the UK located on north Africa’s Atlantic coast, has a tragic history. Formerly a Spanish colony, it has been occupied by Morocco since the 1970s despite a strong pro-independence movement among the territory’s indigenous Saharawi population. Over 100,000 refugees from the resulting conflict still live in camps across the border in Algeria. It was in one of these that the singer and activist Aziza Brahim was born in 1976.

This often harsh environment was where the young Brahim discovered the power and expressiveness of her people’s traditional music and, at the age of 19, she won the “1st National Song Contest” at the Saharawi National Culture Festival. She soon began touring, first in Africa, then in Europe, slowly incorporating new influences into her music, ranging from blues and rock to Spanish flamenco.

Latterly based in Barcelona, her debut album proper Mabruk established her as an important new world music voice, fusing her easy, fluid style with politically charged, defiant, often sad lyrics about the homeland she had left behind. Brahim followed this up with 2014’s Soutak, an even more assured collection which garnered widespread praise, spending a remarkable three months atop the World Music Charts Europe.

New album Abbar El Hamada sees the singer back on excellent form on what might be her most accomplished, varied album yet. The influences of her adopted Catalan home were very apparent on Soutak, and after listening to Buscando La Paz, the first track here, we could be forgiven for expecting more of the same, as the Iberian instrumentation and rhythms are immediately to the fore once again. But as Abbar El Hamada unfolds, it becomes clear Brahim is painting on a wider canvas this time.

Hamada is the word used by the Saharawi people to describe the rocky desert landscape along the Algerian/Western Saharan frontier where tens of thousands of their people remain stranded, and this sense of desolate, barren vistas is vividly evoked in music that is simultaneously stark and beautiful; intimate yet expansive. Featuring a range of contributors including Malian guitarists Kalilou Sangar and Samba Touré and Senegalese percussionist Sengane Ngom, it is indubitably an African album at its heart.

Highlights of the record include the rousing Tinariwen-like rock of Calles De Dajla, the haunting title track, on which Brahim reflects movingly on her people’s plight, and the hypnotic desert blues of Mani, where Toure’s guitar weaves some particularly wonderful patterns. The Latin inflections are still very much part of the picture too; there are hints of Portuguese fado on the elegant, unhurried El Canto de la Arena, while La Cordilliera Negra’s sinuous groove has the rum-soaked energy of Afro-Cuban music. The crisp, crystal clear production of Chris Eckman (Bassekou Kouyate, Tamikrest) ensures every dexterous guitar line and shuffling drum beat leaps out of the speakers.

Above it all, Brahim’s voice, by turns languid, sensuous, yearning and angry, effortlessly glides through the songs; always an integral part of the mix but never a diva-like distraction. Monoglot English speakers may have little idea what she’s singing about, but such is the passion and grace of her delivery, Brahim could be reciting the Milton Keynes telephone directory and few would object. The fact that she has an important message to share makes her performance, and this album, even more significant and impressive.