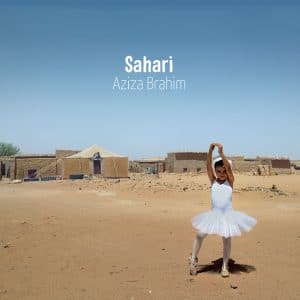 Fleeing from the Moroccan occupation of Western Sahara, Aziza Brahim’s mother settled in the Tindouf region of Algeria in a Saharawi refugee camp, where Brahim was born. Growing up in the camps, exiled from her homeland, Brahim turned to music as a means of expressing herself and has, over the course of three studio albums, a soundtrack and an EP, established a distinct musical identity rooted in her experience as a refugee and immigrant.

It is one that is well able to express both the sorrow and hope of her situation, and to place it within the context of knowing that situation is unfortunately far from unique. “My purpose is to denounce the extreme living conditions there, and the great injustice that prevents Saharawi refugees from returning to their home,” Brahim explains. “I try to capture the feeling of longing that my elders express for the land that was taken away and for their past life in their country. But I know it’s not just us; there are currently 70 million people forcibly displaced in the world. Twenty-six million of them are refugees.”

Brahim’s fourth album Sahari accordingly meditates on war, exile and the cross-cultural dialogues which result, but with a noticeable broadening of her musical palette. Recorded in Barcelona, the album benefits from the assistance of artist Amparo Sánchez, whose studio programming work contrasts with Brahim’s earlier, as-live traditional sound. Spanish language verses appear alongside ensemble folk singing, ululating and heartfelt solo phrases while, in the sleeve, lyrics are translated into Arabic, Spanish and English, indicating a wish for these messages to be heard far and wide. Most strikingly, the songs set up a conversation between Brahim’s desert homeland and the contrasting metropolis in which she finds herself.

Cuatro Proverbios (Four Proverbs) is a plaintive and stark entry point, pairing drums and voice and nothing else, with the following title track kicking off with an electric guitar groove which recalls the music of fellow Saharan desert blues exponents Tinariwen, and features ululating – ingredients which also appear later to arresting effect on Leil (Night). Throughout there’s a strong sense of people in motion and facing constant change, underpinned by the tabal drum, a staple of Saharawi music. Ard el hub’s gently lilting rhythm, starting with an emotional, discordant wail in the intro, suggests trekking across dunes, perhaps by camel, to lyrics by Saharawi poet Zaim Alal: “My homeland, the land of love, the cradle of my childhood, to you the longings rise, that embrace the sky.”

A similar atmosphere runs through Lmanfa, with handclaps punctuating the drums and intricate guitar, and on Masaa Tufulati. In contrast, Hada Jil and Las Huellas (The Footprints) are most evocative of Spain and good times, with the latter’s reggae-ish guitar reminding of fellow citizen of the world Mano Chao, even if the backing vocals – in Spanish – rather call to mind Horace Andy’s Massive Attack contributions. Closing track Ahlami brings the tabal to the fore once more, this time with minor chords strummed on acoustic guitar.

As an expression of the feelings and heritage of a refugee, Sahari works artistically, as a beacon for attention to an under-reported and specific situation, but perhaps best of all as a comradely balm for refugees everywhere. “The normalisation of injustice is something that the Saharawis know well,” Brahim observes. “By addressing that in the songs, I’m trying to fight against the prejudices some people have. We all see tragic news caused by the policies of reactionary governments.” Here then is a thoughtful album speaking up for positive change through an artist living it, and connecting with those who would hear.