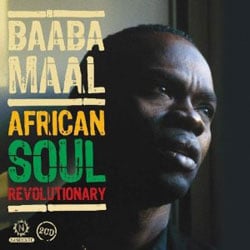 Alongside Yossou N’Dour, Baaba Maal was responsible for propelling the glorious music of Senegal to global acclaim. This two-CD set includes three of his early albums, recorded as the artist combined his country’s traditional music with reggae and funk influences to create an exuberant and stylish mixture that won fans around the world.

Given Maal’s tremendous talent, it’s a shame the compilation starts with the Jombaajo album, a compilation of unreleased tracks from the recording sessions that gave birth to the more famous Wango release. The recordings on Jombaajo sound rough and a little unfinished – these are really only for Maal purists – while Maal’s voice is too loud on some songs and the production standards seem lacking. Listeners new to Maal might be put off and never get to the excellent second CD, which contains most of the tracks from the albums Wango and Taara.

Wango was recorded in Paris by Ibrahim Sylla and appeared on his Syllart label in 1994. Maal and his band Daande Lenol (it means ‘voice of the people’) weren’t afraid to experiment with electric instruments, including electric guitars and keyboards, and this boosted Maal’s international career. He combines traditional Senegalese music with reggae and funk, creating an infectious mix that’s spirited and energetic while nevertheless having a cleanliness and studio polish. This style continued with Taara, which came out in 1997, and opened doors for Maal’s music to appear on the radio and on coffee tables across Europe and the US.

Some may view the somewhat sanitised production quality as reflecting a kind of musical compromise, but it would be an absurd kind of elitism to argue that an artist should stick solely to their traditional roots. It would also ignore the fact that this is fantastic music, wonderfully inventive, absorbing the aforementioned reggae and funk roots while maintaining a uniquely African feel.

This ‘Africanness’ is unmistakable because of Maal’s lyrics, sung in his native Pulaar language. Maal dwells on African themes, advocating self-determination for Africa and celebrating the dignity of its inhabitants. His passionate delivery is a little overpowering at times, but perhaps it’s important to show that this isn’t mere background music. Though he has achieved fame outside of Africa, Maal’s music is certainly not wallpaper to add some kind of watered-down ‘ethnic character’ to fashionable front rooms. It has a message and it has force. If some listeners find Maal’s voice jarring, that is perhaps better than that they let it seep in like a dull reduction of Senegal’s true musical spirit.

The other unmistakable African elements are the rhythms and percussion. Some of these sound a little unfamiliar to western ears, but that’s precisely what makes this music so exciting. On the Jombaajo album, with its simple arrangements, the percussion is even more prominent, and difficult to penetrate, which is why it’s advisable to turn straight to CD2, where the rhythms are given a modern musical context and bedded in arrangements that feature horns, keyboards and so on.

Though the three albums in this compilation have all been released before, there is one formerly unreleased track. This is the final song on CD1, the intimate Tabakaly. It’s a joint effort with Mansour Seck, the blind griot and close friend of Maal’s since childhood. Seck’s guitar-plucked phrases are roughly hypnotic while Maal’s voice soars and careers into the sky. It’s an affecting work that has the feeling of being more than the sum of its parts, which perhaps could be said of Baaba Maal generally. Take away the pop inflections, the reggae, the funk and the studio sheen, and there’s still something left over. Perhaps you could call it the artist’s African soul.