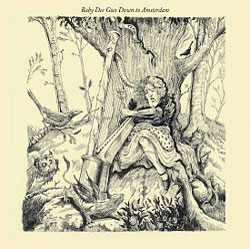 The haunting and comical charm of Baby Dee is showcased perfectly on live album Baby Dee Goes Down To Amsterdam. This follow up to Regifted Light, released in March, collects together some of Baby Dee’s finest songs and allows the listener to hear them as new, adapted and reinvigorated live on the stage of renowned Amsterdam jazz club Bimhuis.

The two disc album opens with applause from the audience followed by Dee’s first quip of the evening “Aren’t you nice to be clapping for me when I haven’t even done anything yet?” which nicely leads into opening track The Robin’s Tiny Throat, a powerfully sombre song seeing Dee solo at the harp, allowing her voice to appear both vulnerable and stentorian from one bar to another. Love’s Small Song and Book Of Songs For Anne-Marie follow a similar vein, with strings added to the arrangement, before Dee shifts to the piano on Lilacs. Throughout, Dee plays her instruments with flawless energy, accompanying her vocal pushes and pulls in perfect momentum.

The album then moves in a more upbeat direction with the jaunty darkness of The Earlie King – a highlight that creates vivid images of a twisted medieval court band through the aggressive delivery from both band and voice. The first disc then comes to a close with three more ballads, Compass Of The Light, When I Get Home and So Bad, though now channelling a rather macabre set of lyrics in contrast to the earlier tracks.

Disc Two has a slightly slower opening, before getting back into its stride on upbeat not-quite-but-could-be-jazz track The Only Bones That Show, leading into the contagiously humorous track, The Big Titty Bee Girls From Dino Town, giving Dee an opportunity to house her dark sense of humour in a rather catchy, silly and witty number. This is followed with the similarly sinisterly funny The Dance of Diminishing Possibilities.

As the last of the upbeat tracks end, the melancholy once more washes over the performance. The rest of the disc is then filled with Dee’s more thoughtful, slightly hopeful but deeply sombre ballads, the highlights being Look What the Wind Blew In, Black but Comely and As Morning Holds a Star, each charming and beautiful, but expressing a feeling of being deeply flawed. This is where Dee’s vocal delivery is at its peak, offering a real vulnerability with just enough guts behind it to keep it from being selfishly miserable.

The album is a rare jewel of a live album, demonstrating both the raw, unadulterated talent that is Baby Dee but also her genius in creating a set list that flows so incredibly well, at no point during the 20 tracks does it become dull and laborious. Whilst there is a slight dip in momentum in the middle, this album is song after song of sheer brilliance encapsulated in Baby Dee’s vibrant and quirky stage persona. Truly unusual and beautiful.