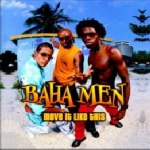 Let’s get one thing clear. Baha Men are not a new phenomenon. They’ve won a Grammy. Who Let The Dogs Out took the novelty record to new heights, and while everyone wondered if we’d ever hear of them again, they have repeatedly returned to the singles charts with something even sillier. And, would you believe it, this new album is their eighth. Hurrah for endurance, then.

Move It Like This (the single) showcases the novelty-act-come-good theory. It might be infused with Caribbean rhythms and instruments, even vibe, but it is on a basic level just the sort of song you’d expect B*Witched to release.

This album is pretty much in the same vein. The title track is followed by a butchering of Harry Nilsson‘s Coconut from the Reservoir Dogs soundtrack which is quite unlistenable, while I Thank Heaven is one of several tracks to be afflicted by vocoderitis, a peculiar condition which makes artists and producers think that, by synthesising a voice like Cher did in the chorus of Believe, they end up with something modern and hip. In amongst all this are the group’s strengths – their rapping is well above average and they always sound like they’re enjoying themselves.

The end result is something that just manages to lose its novelty and charm by trying too hard to venture into urban R&B – and Lord knows there’s enough of that already without this lot trying it. Scarily, several of the tracks on here are good enough to be singles – which is fine. As long as I don’t have to listen to the whole album from end to end again any time soon I might just like them.

Keeping it real they ain’t, but when it comes to inoffensively lifting spirits and enjoying success, while infusing pop with something just a wee bit different, these guys are the trailblazers. A mixed bag, then, but by no means the worst album you’ll hear this summer.

More on Baha Men
Baha Men – Move It Like This