Band Of Horses – Acoustic At The Ryman 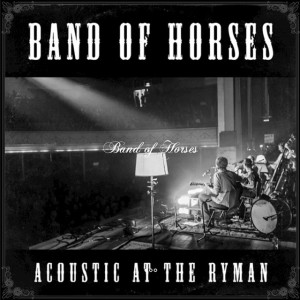 Following on from their ambitious fourth album, 2012‘s Mirage Rock, Band Of Horses‘ latest release sees them scale their sound back and focus on the basics. Acoustic At The Ryman does exactly what it says on the tin, with 10 songs captured during a pair of acoustic shows at Nashville’s legendary Ryman Auditorium in April last year.

Recorded using the high resolution Direct Stream Digital (DSD) format, it is important to point out just how good the LP sounds from start to finish. The sound is crystal clear, capturing every element of the band’s acoustic set up with beautiful clarity. If you close your eyes, it is almost as though you are in the Ryman Auditorium – clapping and cheering alongside those fortunate enough to attend the actual gigs.

The record kicks off with the wistful Marry Song, taken from the band’s second effort Cease To Begin, which was released back in 2007. “I’ll marry my lover in a place to admire/ I don’t have to even ask her I can look in her eyes,” croons lead vocalist Ben Bridwell, over the melancholic piano melody and twee acoustic guitar. It is a gentle introduction of what’s to follow, demonstrating the ease of their transition.

No One’s Gonna Love You is another song to make the cut from Cease To Begin and it’s clear to see why. While the song was successfully given a pop makeover by Cee Lo Green in 2010 for his third album The Lady Killer, nothing quite compares to hearing Band Of Horses perform the song live, as the bare-bones arrangement and haunting harmonies deliver an emotionally compelling four minutes of music.

Unsurprisingly, Mirage Rock receives less airtime. Despite being their most recent record, it is far more upbeat than their earlier material and less suited to the acoustic treatment. However, Slow Cruel Hands Of Time is a mesmerising addition to the set, one completely in keeping with the more classic Americana moments, while Everything’s Gonna Be Undone provides a welcome change of pace to proceedings.

If anything, though, it is Band Of Horses’ reluctance to stray too far from their more traditional folk influences that results in the LP becoming somewhat repetitive around the halfway mark. Factory and Older, two back-to-back songs from their Grammy Award-nominated third album Infinite Arms, are perfectly pretty and well executed, but neither has the spark required to really make them stand out from the record.

In fact, as good as the record sounds, it doesn’t quite manage to capture the same sort of unbridled electricity that iconic live albums like Nirvana’s MTV Unplugged – one mentioned by Bridwell in the lead up to the band’s own acoustic effort – achieved. Although the two acts come from different genres, the unmistakable rawness of Nirvana’s live record is not replicated by Band Of Horses.

Sometimes it is preferable for live records to be a little rougher around the edges, but Acoustic At The Ryman is just a bit too clean and ‘nice’ for its own good. Yet, just when it appears the LP is drifting towards an unsatisfying conclusion, the band’s heart-tugging breakout song The Funeral, from 2006’s debut Everything All The Time, makes a memorable appearance. Stripping the song back to just Bridwell’s vocal and the piano melody, it is a powerful reminder of just how good Band Of Horses can be.

There is a lot to love about Acoustic At The Ryman. The record is undoubtedly an enjoyable, comforting listen, one that provides an interesting trawl through Band Of Horses’ back catalogue. It is, however, unlikely to appeal to anyone who is not already a fan – acting merely as a stop gap until the band return with a new studio album in the near future.

Band Of Horses MP3s or CDs

Band Of Horses on Spotify