Band Of Skulls – By Default

by Graeme Marsh
published: 24 May 2016 in Album Reviews
Tweet 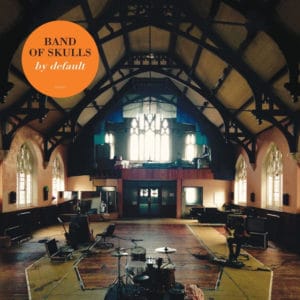 Having spent the last five years or so rigorously touring, it’s probably a given that Southampton’s Band Of Skulls are rather knackered. The last two of those exhausting years followed the release of the band’s third album, Himalayan, a collection seen by the trio as a “coming of age”.

Fourth album By Default was preceded in March by lead single Killer, and at the time the band declared they were entering a new era. “The first three records were like a trilogy, a piece of work in themselves,” said Russell Marsden (guitar, vocals) upon the single’s release. Digging a little deeper, the new era appears to be centred around the rare occurrence of a larger than usual gigging break and the space and time they were subsequently afforded in order to concentrate their efforts more carefully rather than rushing anything due to another looming tour.

Walking around Southampton one day, the band stumbled across a Baptist Church. They had been looking for something a little different where they could get some peace and time to think clearly and thrash out ideas, and the unique atmosphere of a church allowed them to do exactly that.

They had amassed an incredible tally of around a hundred songs that they were keen to take a closer look at in the church/studio environment, and the sounds the band made, aided by the incredible acoustics of the church, thrilled them.

While the impressive Himalayan featured six tracks over four minutes long, By Default sees this length exceeded just once, concentrating more on short, sharp power punches. Coming in at track three, the aforementioned Killer with its thunderous percussion and fuzz-heavy guitars at first recalls more recent Arctic Monkeys efforts and is a decent cut but there’s something glaringly obvious about three of the first four other tracks at the start of the album that elevates them all above the first single – their choruses. Opener Black Magic uses a magnificent riff to hook you in but the chorus is sublime; it’s quite possibly one of the best and coolest sub-three minute cuts you’ll hear this year.

Back Of Beyond takes on an up-tempo rock ‘n’ roll presence, throwing in a “be-bop-a-lula” in verses sounding a little like Billy Idol in the immediate aftermath of (his best album) Rebel Yell, and twisting a T.Rex like riff before launching another infectious chorus. Bodies is a little slower, but again it’s an instantly memorable number benefiting this time from additional keyboards – you’ll be enjoying this one straight from the off, its chorus arguably the best of the lot.

Tropical Disease is more menacing, like something out of a grimly fiendish theatrical performance, whilst So Good sees bassist Emma Richardson take lead vocals for the first time for a more jaunty, funky cut featuring just the slightest whiff of Foals-like math-rock guitar. This Is My Fix and Little Moma are a little less appealing – the album losing some direction during the middle section – but the stunning Embers resurrects things with its Queens Of The Stone Age-like sea of moodiness that leads to an anthemic chorus. In Love By Default changes direction again for an effort that sounds like a James Bond theme tune, whilst toned down closer Something takes the band into completely new territory, coming across more like a Prince track than something from a rock band that veers towards the heavier riff corner of the genre.

“We’re proud of this new album we’ve made,” says Marsden, and rightly so. It may not quite scale the heights of Himalayan but the appeal of By Default lies in different quarters, with some of the choruses easily the best the band have put to record. With the break over and touring already having restarted, they’ll be coming to a town near you very soon, one would imagine. Don’t miss them.