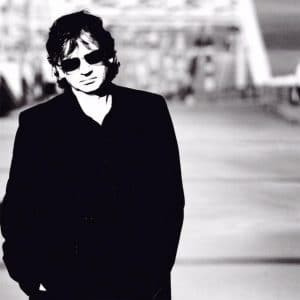 One of Irish music’s best-kept secrets, Bap Kennedy is well into his fourth decade of recording to a devoted cult audience. It seems like a lifetime ago he fronted U2 wannabees Energy Orchard, and in the intervening years Kennedy has been moving closer and closer to folk and country, the musical source that is dearest to his heart.

Following on from such fine albums as The Domestic Blues (1998) and The Big Picture (2005), Kennedy’s Howl On is another object lesson in economical songwriting and solid musicianship.

The album is Kennedy’s most explicitly American to date, tapping into that country’s deep musical roots for inspiration. Beyond the rootsy sounds, the lyrics are informed by the gigantic realities that inform recent American history. To whit, Howl On draws on Kennedy’s childhood memories of the moon landings, cowboy movies, Hank and Hendrix, and the King himself, Elvis Presley.

The soft shuffle and aching slide guitar of the opening America set the scene, with Kennedy retreating to his childhood self and imagining the American dream from in front of his TV set. It’s a beautiful little song, self-referential but not self-indulgent.

The following Cold War Country Blues is even better. The structure is pure Hank Williams honky-tonk, all toe-tapping melody and acoustic guitar, but it is Kennedy’s lyrics that nail the song home. A slightly surreal riff on Hank, Elvis, JFK and Jim Lovell (the former NASA astronaut), the song is liberally sprinkled with delicious non-sequiturs the best of which is “they sent Hank Williams to the moon”.

Occasionally Kennedy’s Celtic soul roots shine through, notably on Right Stuff and the beautiful title track. For the best part of the album, however, it is rootsy country/folk all the way, even on the autobiographical Irish Moon which tips a wink (and a drink) to the forgotten astronaut Michael Collins.

There is the odd lapse on this fine album. The Blue One, Howl On and The Heart Of Universal Love drift into the bland ballad territory normally occupied by Mark Knopfler and latter period Van Morrison, indicating that at times Kennedy is still guilty of trying too hard to emulate his heroes.

Which is a shame, as Kennedy is capable of flipping the odd musical trick on his own merit. His cover of Hey Joe is a case in point. A dangerous song to cover because Hendrix nailed the perfect version over 40 years ago, Kennedy hits a nice groove that balances skittery honky-tonk drums and discreet electric guitar to good effect.

The album draws to a close with the wistful Ballad Of Neil Armstrong, neatly wrapping up the thematic links running throughout the album. I was reminded most of Ry Cooder, with a musician reaching back to early, basic music forms to provide a commentary on our troubled times, but also having a damn good time recording the album to boot.