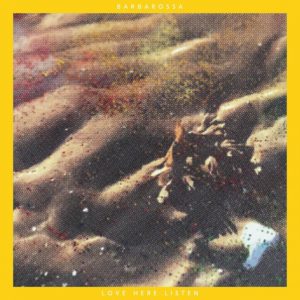 Prefaced by a naïve piano motif, the funk gyrations that surge in and out of Always Free recall the flat tidal stretches of Kent coastline that lie within a stone’s skim of GCHQ, the Margate recording studio of Ghost Culture, where Barbarossa’s most recent album Love Here Listen was recorded. Employing the super producer, fresh off their work with Daniel Avery and Alessandro Cortini, to add a fine lustre to James Mathé’s brand of hyper-controlled soul balladry, the album cruises by of its own homogenous accord, delicately caressing the ears with its uncomplicated anaesthetized brooding.

Diminutively erratic synth belches launch second song Iris2Iris, its questioning narrator rhetorically improvising over ambiguous currents of white noise. Muscular strings traverse the indeterminate composition before a flurry of quick cut beats vapourise its frame and lead us gently to next track Recliner. Notable for the pulsing syntax of its soaring chorus, the silken vocal draperies grasp onto the precariously crumpling melody. Consistent with the harmoniously fluid musicianship that made the tracks prior so engaging, fourth track Cellular finds Mathew borrowing from James Blake’s haunted dramatics playbook, lamenting over the tracks sputtering minor chord symphonics.

Elsewhere the meditative emotions that give Intuit its own velocity customarily undulate outward but never manage to break the song’s peaceful surface. Subtle to the point of being imperceptible, the album is frustratingly non assertive, Mathé rarely daring to live perilously or experiment wildly, shackling himself to the security blanket of his own dormant limitations and as a result the record, whose narrator has so much to say, despite being attractive and graceful, communicates very little.

As his songs have sunken away from the strident acoustic boldness that shone from his debut Sea of Blood 16 years ago, towards these innocuous arpeggiated compositions, they appear to have lost some of the colour and depth that once made them so daring.