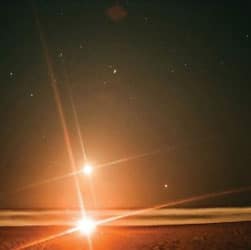 Ancestral Star is the third album from Barn Owl and the one that looks set to bring them to much wider attention. The San Fransiscan duo are curious chiefly for the way in which they are challenging the attention deficit tendencies of the digital era by making an album clearly intended to be digested as a whole. Whilst there are individual tracks, many of them evocatively named (Night’s Shroud, Sundown, Cavern Hymn), this set of instrumentals feels very much like a complete suite of music.

Barn Owl turn what is essentially the fundamental sounds of rock guitar into something that feels widescreen and artistic. These are mood pieces, sometimes based on drones, at others based on small clusters of notes that offer a hypnotic blend of bleakness and beauty. There are some wonderful individual moments – the slow building drone that ushers in the epic title track, or the dusty Ennio Morricone twang of Visions In Dust and Night’s Shroud. Awakenings even has a nuanced, delightful melody. What is most impressive, however, is the way in which the mood is carefully sustained and developed throughout.

Guitar effects are a dreadfully over-used device these days, often deployed as a means of hiding obvious musical deficiencies. Barn Owl are adept at handling their equipment though, and have crafted a sound world in which the effects are essentially instruments themselves. It’s an impressively broad palette too – whilst this music is undoubtedly slow to unfold and demands considerable patience from the listener, it does not feel one-dimensional or short on ideas. Barn Owl understand the virtues of textural variation and are able to achieve this without resorting to what have become, in the lineage of Mogwai and Godspeed You! Black Emperor, the cliches of extreme dynamic contrast.

If there is a problem with Ancestral Star, and perhaps with Barn Owl in general, it is that there are other bands operating in very similar terrain. Most specifically, the most recent albums from Earth have already offered dark desert blues. These comparisons have been used in relation to Barn Owl but, even accounting for Ancestral Star’s greater variety, they remain valid. No one band can ever lay claim to a particular sound or area of music – and it was always likely that such a distinctive approach would have wider influence. At their best, Barn Owl add much of their own character and flavour.

A good example of this might be the mesmerising Flatlands. This actually sounds closer in spirit to the minimalist modern composition of Max Richter or �lafur Arnalds but is much more emotionally ambiguous than the work of either of those artists. It suggests fruitful new territory which the group might explore further in the future. There is the potential for this group to get well beyond the doom-laden expectations of drone rock.