Barn Owl – Lost In The Glare 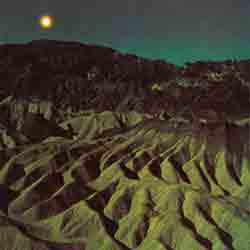 Lost In The Glare is the second full album released on Thrill Jockey by Barn Owl, following 2010’s Ancestral Star and it sees San Franciscan duo Evan Caminiti and Jon Porras diversify and consolidate their distinctive sound. The arid, smouldering guitar landscapes remain but they have been improved and allowed to move in hitherto unexperienced directions, possibly even edging them away from the musical periphery they have occupied to now. Inspiration is still drawn from natural phenomena, environmental events and cosmology, all of which are equally reflected in the track titles, as they are in the widescreen sound. The mountainous terrain and illuminated sun featured on the album cover art serve to reaffirm this perception.

Pale Star opens the album in familiar style, a lone guitar line being slowly drawn out and augmented into a fuller, more dissonant sound. The dynamic changes towards the end of the track, as the guitars fall away and allow a measure of serenity to momentarily surface. Turiya has more of an overt (post) rock sound and features some of the most striking percussion on a Barn Owl record to date. At times it is even reminiscent of Come On Die Young-era Mogwai.

The duo of Devotion I and Devotion II best encapsulate the expanded sound on the album. The former is a masterclass in detailed, controlled tension, and possesses a discreetly pervasive quality that shows they don’t need to rely on amplified guitars to create their richly evocative ambient panoramas. Devotion II closes the album in contrasting style, incendiary guitars and crashing drums merging to form a powerful, affecting cacophony. As with Ancestral Star it is this final track that is arguably the highlight of the album. However, it cannot claim to be the heaviest or bleakest track on the album, an accolade comfortably taken by the aptly named The Darkest Night Since 1683. Its appearance sees the mood noticeably blacken as angry, menacing guitars impose themselves on the album in abrasive fashion. If the opening three tracks witnessed the careful creation of a vast sonic architecture, this is the sound of it being methodically and brutally razed to the ground.

Temple Of The Winds follows and reverts to softer acoustic textures. It provides signs of reconstruction and succeeds in lifting the mood back up from the dark chasm it fell into during the previous track. Midnight Tide and Light Echoes are more restrained, the former containing some of their most accessible moments, while the latter plays out to a searing guitar drone that depicts an exposed, barren sonic wilderness. Lost In The Glare is a wonderfully cohesive album of instrumental-avant-Americana. It is a powerful listen and at its vertiginous peaks is something of a transcendental experience.