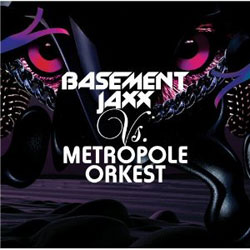 Basement Jaxx burst onto the British music scene at the end of thelast millennium via the underground clubs of Brixton, bringing to thecharts a uniquely exuberant, Latin-tinged version of house that wasboth innovative and hugely accessible. Hits such as Red Alert andRendez-vu established Felix Buxton and Simon Ratcliff as a genuinecrossover act with an appeal far beyond the dance floors of theirnative South London, and although their days of top ten singles may bebehind them, this intriguing collaboration with Dutch jazz/poporchestra Metropole Orkest shows they are still a restless creativeforce.

A mixture of live performances taken from a recent concert inEindhoven and new studio recordings, these reinterpretations of theJaxx’s back catalogue feature a 60-piece orchestra and 20-strongchoir, conducted by Metropole Orkest’s Principal Guest Conductor JulesBuckley, who also produced the project and scored all the orchestralarrangements in tandem with Buxton.

After the first few tracks, you could be forgiven for thinking thatyou’d stumbled into the latest season of Proms concerts at The RoyalAlbert Hall. The source material may be by Basement Jaxx, but this isstraightforward, unadulterated classical, with the originalcompositions almost unrecognisable on first listen.

Red Alert becomes an epic, Wagnerian overture, with massed voices,stirring strings and monumental brass taking the place of the familiar‘yo yo yo, yo yo yo yo’ chant. Similarly Raindrops (from 2009’s Scars)is transformed from disco stomp into a soaring, full-on orchestraltour de force, complete with twinkling harp, and new offering Mozart’sTea Party – a trite pastiche of the great man’s signature style –would be very much more at home on Classic FM rather than BBC 6Music.It’s undeniably a confident, highly accomplished opening salvo, butwhether it will appeal to the group’s established fan base is moredebatable.

The middle section of the record is generally the leastinteresting, although Hey You’s eclectic mix of The Lambada, JamesBond themes and Balkan instrumentation is certainly ambitious.Elsewhere, a slow, stately Bingo Bango loses all of the 2000 hit’senergy, and Lights Go Down is bland and overwrought.

It’s only on the last third of the album that the carnival vibe ofBasement Jaxx really starts to shine through, with an effervescentperformance of Do Your Thing kicking off the long overdue party. Theoriginal’s jazzy dynamic is developed further rather than completelyoverhauled, with the light, breezy brass and strings complimenting thesong’s infectious rhythms.

Where’s Your Head At is another high point, with delicateharpsichord neatly counterbalancing the choir’s huge chorus, whileGood Luck benefits from the belting voice of The Bellrays’ LisaKekaula. Basement Jaxx Vs Metropole Orkest ends with Samba Magic, anirresistible combination of Buena Vista Social Club piano and highclass cabaret. It’s great fun, encapsulating perfectly the disparaterange of influences that make the Jaxx so much more than just a danceact.

When it’s purely orchestral, Buckley and Buxton’s project isimpressive but rather cold and unengaging. Reworking what isessentially club music into convincing classical pieces is no meanfeat, but it’s only when more contemporary voices and beats arebrought into play alongside the violins, flutes and trumpets thatproceedings really come to life. Even then, one wonders how manyBasement Jaxx aficionados would really rather listen to these versionsthan the tried and trusted originals.

A brave experiment then, and more than likely a fabulous liveexperience too (the show is at The Barbican on 14 & 15 July), butultimately more of a novelty for the curious than an essentialpurchase.