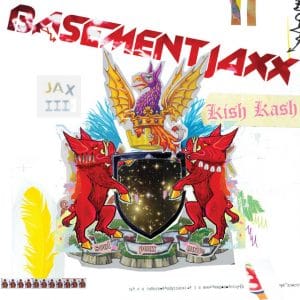 From being a uniquely underground concern, respected by your heroes and contemporaries whilst firing off demented moments such as Fly Life (which sound like the Notting Hill Carnival taking place in an exploding leisure pool), to having bricklayers chirpily miming along to Do Your Thing on popular DIY shows, and wearing monkey masks at award ceremonies – Simon Ratcliffe and Felix Buxton have always done things in a unique yet slightly barmy manner.

Kish Kash, Basement Jaxx‘s third album, sees the duo leaving the sweaty house party behind and letting loose, bounding out into the open air. Yet without getting all rural and breaking out into a folk sweat / trombone death, Kish Kash sounds freer, more fun, and most importantly, more exuberantly exhausting than any other album released this year.

The pounding defy-funk of Good Luck kicks things off with guest vocalist, The Bellrays‘ Lisa Kekaula, giving it some full Tina Turner lung. It’s a furious cyber blast that kicks the teeth in of both Remedy and Rooty. Both Dizzee Rascal and Siouxsie Sioux turn up, not only to up the Scrabble score potential, but to deliver the album’s highlights: Dizzee on first single Lucky Star, which couples Sigue Sigue Sputnik FX with Middle Eastern tootles whilst the Dizz distances himself from the garage muppets; and Siouxsie on almost title track Cish Cash giving some trademark spiky wail over a Northern Soul / melting fruit machine hybrid.

Meanwhile JC Chavez (the one who wasn’t Justin or had the humorous surname in ‘N Sync) gives it some JT on the saucy bust of Plug It In and New Yorker Meshell Ndegeocello gets a bit X-rated on the even ruder Right Here’s The Spot, but is less comely on the lengthy closer Feels Like Home. Felix also gets a tune or two, including the puny punk Living Room, where he sounds like the most hopeless rocker ever.

Synths and samples parp, burp and “squoogle” throughout Kish Kash, and on first listen it does seem like there is a trade off between them and memorable tunes. Yet, like all the best art, it makes much more sense the more you’re exposed to it. There’s the unmistakeable boogie simmering beneath which, try as they might, ‘ver Jaxx just can’t shake off. It’s not a completely smooth ride, but Kish Kash works.

If you forget about all that “dance music is dead” palaver, and think of Basement Jaxx more in the vein of a house Specials and nothing at all like Coldplay, then all earlier concerns evaporate. Ultimately though it makes you want to take your clothes off, and that, my freaks, is a very good thing indeed.