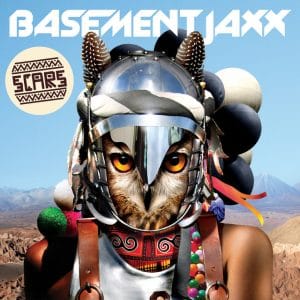 Out there in between the largers and the popstrels, the chart-scalers and the club-bangers, sit Simon Ratcliffe and Felix Buxton. Under their showbiz nom-de-plume Basement Jaxx they’ve been turning their disco weaponry into pop gold for over a decade.

Since their first proper album (1999’s Remedy), the duo have quite literally mashed up genre upon genre in the pursuit of a bangin’ choon, and with a previous form that includes classics such as Good Luck, Romeo, Red Alert, Where’s Your Head At? and Fly Life, it’s something they do very well indeed.

Now, three years on from 2006’s slightly underwhelming Crazy Itch Radio, and four on from the indispensible Singles Collection, Buxton and Ratcliffe are back. Wise enough to know that the scene that spawned them has been lost to time, and their disco contemporaries of yore (Leftfield, The Chemical Brothers, Underworld) are off radar or simply no longer about, the Jaxx are almost a singular presence their own field.

Scars sees the duo carry on in their own familiar way, returning more to the Mercury-nominated sound of Kish Kash, the album that distilled their style into something near perfection. It’s chock-full of guest turns from the likes of Kelis, Yoko Ono, Santigold, Sam Sparro, Chipmunk, indie minstrel Lightspeed Champion, Amp Fiddler and Yo! Majesty. It’s still sarf London, albeit a sarf London that’s changed somewhat in the last few years. The beats still pummel and the bass still wobbles your ribcage and, as a bonus, upsets the bloke downstairs most pleasingly.

First single Raindrops is indicative, while Santigold’s turn on Saga is a highlight. Sparro’s white-boy soul magic Prince-ling turn on Feelings Gone is one of the best and most jubilant end-of-summer tunes ever, while Lightspeed’s My Turn is dancing-as-your-heart-breaks joyous. A Possibilty utilises the swooning guitar riff of Santo & Johnny‘s divine Sleepwalk to magical effect. Originally released as a white label last year, Twerk has Yo! Majesty flowing superbly over what one might term a ‘club banger’ – quintessentially Jaxx. Best of all, Ono’s turn on Day Of The Sunflowers (We March On) gives the first lady of art-wonk a meaty skank that ranks with her finest work.

Does it sound a bit too much? Not really. There’s a breathtaking array of bleeps, quirks, bits and bobs popping up to keep the boogie busy and the mind attentive. This is what Buxton and Ratcliffe do best, and Scars ranks up there with their finest work. Aimed at the feet, the head and the ass, it’s a club album that sounds equally fine in the home. To paraphrase an earlier Jaxx tune: Take it back to your house. Very, very good.