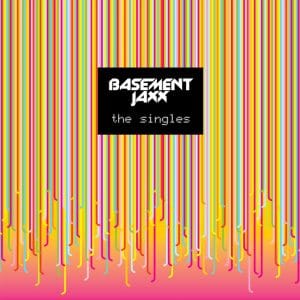 In a world of downloads and rumours of the death of the single, it’s nice to see someone still taking pride in a fading tradition. Basement Jaxx hail their new album with an authoritative title which, although some may dismiss as unimaginative, needs no imagination. The flagging noun could never suppress the full technicolour glory each one of us know lurks inside the cover.

Each stand-alone track created over the past six years by Jaxx duo Felix Buxton and Simon Ratcliffe has the pure stomping power and unforgettable energy every successful single should possess. And even though the previous three UK top five albums were good, the supporting tracks tended to wash out the headstrong solo offerings.

This chronicle of delectable A-sides however, is a true flurry of Basement Jaxx goodness – fast paced and unrelenting. Not dissimilar to the lives of Jaxx duo Felix Buxton and Simon Ratcliffe, who, after picking up a Grammy last month in LA for best Electronic/Dance album, were promptly dropped from their US label, who have made a ‘best of’ album but included U Don’t Know Me, a single yet to be released. We’ve seen their trainers, their laces are in double knots.

Oh, but the joy to have an album as colourful as this to mark the coming of spring. Gone are tired grey submissions of winter 2004/5 and, as brazen as your nudist sunbathing neighbour, in trumps the carnival showhorse that is The Singles, hot on the heels of new pop-tastic single Oh My Gosh.

From the ‘soulful’ Red Alert to the raga-quipped Jump N’ Shout, the industrial hammer Where’s Your Head At, and the Eastern-promised Lucky Star, The Singles pulls you along your favourite path of yesteryear’s dance to tomorrow’s disco.

With a gaggle of vocalists ranging from Kele Le Roc, Dizzee Rascal to JC Chavez, the diversity is huge and talent supreme.

And if you have all three previous albums already, don’t panic. The little goody box will include for a limited period only a 14-track bonus disk with remixes by 2 Many DJs and other gifted knob-twiddlers.

It’s a shame the only unheard single as yet, U Don’t Know Me, is the weakest on the album. The heavy electronic pressing gives it a strong likeability, but unlike the rest of the tracks, you’ve heard it somewhere before.

But even so, if you’ve criminally never owned either 1999’s Remedy, 2001’s Rooty or 2003’s Kish Kash, treat yourself to an early summer with The Singles. It’s audaciously fun lunacy that will cheer your day.