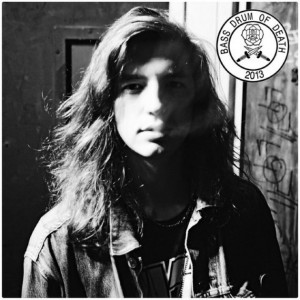 Bass Drum Of Death’s first album was a promising scramble through a world of loud noise and razor edged distortion. If you liked that one, you’ll like this one too, but if you weren’t a fan to begin with, this certainly won’t change your mind. This eponymously entitled album offers much to be enjoyed, but little that’s new – by the end of the record BDOD’s raw, slouching garage rock begins to feel dangerously like a default setting.

Bass Drum Of Death was originally the name John Barrett took when he went on stage solo with a guitar and bass drum. Things have moved on a little since then – the current live set-up consists of two guitars and a drum kit, but not much more sophistication than Barrett used to achieve on his own. That is of course no bad thing – Bass Drum Of Death is, at its best, a little reminiscent of Raw Power in terms of production values and a propensity for big dumb hooks, and there are few bigger compliments to give to a garage rock record. But it seems likely that Barrett needed backup for other reasons too. Chiefly, he’s no Jack White: where White used Meg White’s thump thump bang bang drumming as a platform from which to set the stage on fire with white hot licks, Barrett’s drummer is more active, and a vital support for the muddy, grungy guitar playing that revels in its total lack of ambition.

While Bass Drum Of Death is stripped back and wins many points for commitment to a certain aesthetic, it’s also a largely successful album in terms of tunes. Lead single Shattered Me is cut from the same cloth as the best music by The Drums, Best Coast and recently Bleached and begs to be played on a speed-limit breaking journey to the beach. The Sonic Youth sounding Bad Reputation and the – dare it be said – pop-punk Crawling After You are complete successes. The former makes the best use of dynamics on the record, and rarely elsewhere is the distinction between loud, really loud and really really loud used so effectively.

There is also the odd attempt to adapt the BDOD template to slightly more classic songwriting. Such A Bore sets up nicely with a riff that might’ve been on a Roy Orbison record, while Faces Of The Wind sounds a lot like Iggy & The Stooges on a dark day – think Gimme Danger or Penetration. But the effort to widen the record’s scope is generally only half-successful. Barrett writes very well in one mood, and his attempts at greater complexity are hamstrung by the constant use of very simple tools. The results are often underwhelming.

Indeed, the central problem with Bass Drum Of Death is the chronic lack of variation. Sticking to a particular sound is all well and good if your songs are interesting, surprising or witty – hence the universal respect and awe in which Pixies are held. You’re never in doubt that you’re listening to a Pixies record, whether Frank Black is crooning his way through a gushy love song or whining about a brain adrift in the middle of the ocean. By contrast, Bass Drum Of Death play very similar songs in a very similar way, showing only passing interest in varying the theme. Of course, for a band who seem to exist to soundtrack the life of a slouching, half-arsed college-dropout, this may be half the point, but if their third album repeats the trick, people might begin to lose interest.

Bass Drum Of Death on Spotify