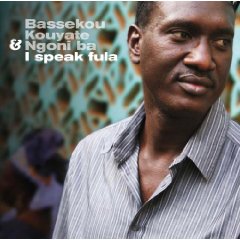 The music of Mali is in incredibly rude health at the moment, and figures such as Toumani Diabaté, Rokia Traoré and Bassekou Kouyate continue to do sterling work as ambassadors in bringing the music of their country to the Western.

Kouayate has built up a reputation as a live player of some repute, and was originally in Diabaté’s Symmetric band. Now he has his own quartet, the first ngoni quartet Ngoni ba, and is even helping to redefine the approach to the instrument in his own country. Where this lute-like construction used to be played freehand, so to speak, Kouyate strapped it over his shoulder and played it like an electric guitar, an approach now widely adopted.

The quartet play with a virtuosic style that also proves extremely hypnotic. Even when taking a back seat to the calming vocals of Jamana Be Diya or Torin Torin, the continuous thrumming in the background is a thing of beauty, providing energy and momentum to the music but also existing in a trance-like state of consonant harmonies.

The instrumental episodes are more improvised, very much of the moment, with the four players recapturing the live Kouyate experience while contriving not to fall over each other or overplay.

The beginning of Falani is an elaborate example of their craft, ushering in a communal vocal, while in Ladon they briefly come together in a stately series of chords, before striking out on different musical paths once again. Each time they play this way the whole remains greater than the sum of its parts.

Vocally Kouyate receives support from wife Amy Sacko, an energetic but sensitively voiced presence, and contrasts this nicely with the subterannean depths reached by the voice of Andra Kouyate in Bambugu Blues, a reflective piece that also features the electric guitar of Vieux Farka Touré among the softly undulating ngoni lines.

It remains a humbling experience to listen to music as striking and brilliantly executed as this, African rock music leaving its Western equivalents often standing still with its sheer energy, commitment and verve. This is another example.