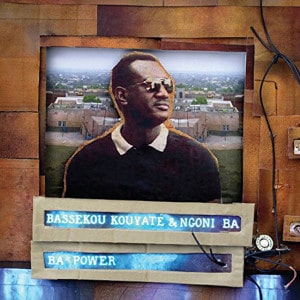 These are good times for African music. The continent is getting more exposure than ever before, new acts are emerging with pleasing regularity and each year sees established names return on what seems to be a constantly revolving basis. Malian griot and ngoni player Bassekou Kouyaté undoubtedly falls into the latter category. Ba Power is his fourth album with his band Ngoni Ba (his first for leading world music label Glitterbeat) and continues the progressive trend set in motion by its predecessors.

An impressive and expanded cast of musicians contribute to the vibrancy and power of the album. The core Ngoni Ba band remain in place and Kouyaté’s wife Amy Sacko still is the primary vocal presence, but they are supplemented by the likes of Samba Toure, Jon Hassell, and Dave Smith (drummer in Robert Plant’s Sensational Shapeshifters band and driving force behind new British jazz act Fofoulah).

This broader range of contributors, alongside the sharpness and clarity of Chris Eckman’s production sees the songs take on a more immediate and resonating form. Lyrically it also covers wide ground, at different times celebrating and promoting women’s rights, warning of the consequences of intolerance and touching on familiar themes of belonging and family. It may lose some of the nuance and delicacy found in places on previous albums like I Speak Fula and Jama Ko but this is replaced by a new set of sonic values.

It’s no clearer than in the glittering cadences of opening track Siran Fen. A sense of assertive vitality and urgency abounds as glints of light bounce off the ngoni. Kouyaté’s instrument of choice still occupies a starring role on the album but it’s a denser and in places a more guitar-centric sound than heard to date. Musow Fanga extends the sense of liberation further and similar can be said of Abé Sumaya, the strident lead vocal being offset by the softer backing and percussive flourishes.

The infiltration of a Western rock aesthetic is more evident in the winding electric guitar lines of Ayé Sira Bla, yet the outstretched and impassioned vocal of Sacko anchors the sound firmly back to Africa. It also sees Jon Hassell adding subtle layers of trumpet and keyboards to the mix. Borongoli Ma Kununban reasserts a more traditional, understated sound whilst also boasting arguably the most natural and timeless melody on the album (the overall command of melody throughout is another strength of Ba Power).

Waati has a looser and less structured feel while Fama Magni traverses rougher, sandier terrain – largely down to Samba Toure’s presence on lead guitar and the singing of Zoumana Tereta. Musically, Te Duniya Laban is gentler and lighter meanwhile and alongside Bassekouni ensures a relatively low key finish.

Despite several years of strong releases from Africa it still feels like a genuinely new and innovative sound is still proving elusive. Ba Power might not provide this breakthrough but it comes in right at the top of the genre. It’s the sound of an artist who has achieved a level of mastery of his own instrument and rather than sit still has sought new directions to move in. It’s a strong and pressing example of how musical elements from different geographical sources can be integrated successfully and portrayed in cohesive, striking style.